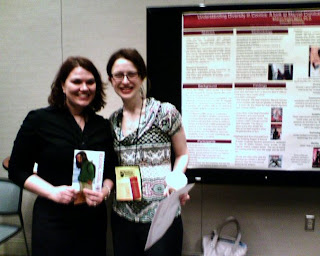 The International Reading Association Convention always brings tons of excitement. Last year, I met Myron Uhlberg. This year I met Heather Harper the Managing Editor of Study Island. I can't wait to tell you more about Study Island's Online Graphic Novel Reading Intervention for K-12. The World as You Know is "an original, online graphic novel created by Study Island and its Original Island Inks imprint. It is a three book series following the adventures of Solomon, a Native American middle school student; Lukas, a deaf, foreign exchange student from Cameroon; and Esperanza, an ambitious Hispanic girl who guides Solomon and Lukas on their adventures. The trio believes their world is only as big as their front yard. When the three are shown what awaits them just under the surface of the world they know, they call into question what they know about that world and each other. It is a visual delight mixing one part mystery, one part fantasy, and one part discovery that sends the world on its head." I'm most excited about Lukas Biya. Read his bio below.

Lukas is from Cameroon. He is deaf, which automatically carries its own challenges. However, add to this that he, much like Solomon, is an outcast, and Lukas' life seems even more different than the lives of his classmates. His father is an important diplomat who makes little time for Lukas, but this does little to bring down Lukas and his fiercely independent streak. Lukas is similar to Solomon in that he is a pleasant kid, but he is also very skeptical. These traits are an advantage within the unit of the trio; however, alone, these qualities make Lukas vulnerable to dealing with others. Lukas soon learns that he is the central figure in a situation that is out of his control. It affects his relationships with his friends and family, and just when he thinks that he has come to grips with his place in this world, his world is turned upside down, putting him back at square one. (Study Island)

This will be out in March. I've already seen some of the panels and I'm very excited. I'll keep you posted! 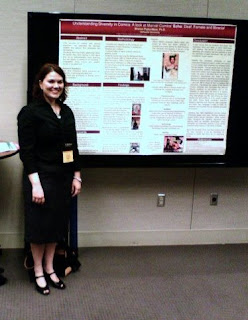 Below is my Poster from the Presentation on Marvel Comics Echo- Deaf, Female and Biracial.

Keep in mind that the International Reading Association does have a Special Interest Group for Deaf and Hard of Hearing Readers. Click on the link for more information. 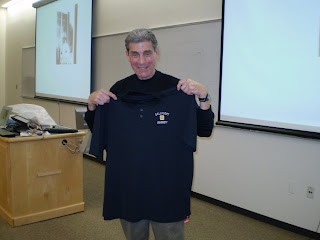 I have been planning this visit for months and dreaming about it even longer. The week was a whirlwind. First, the book Hands of My Father was selected by Amazon as one of its Best of February selections; then, the book was released; there was a review printed in the Wall Street Journal, and finally Myron Uhlberg, having never stepped foot on Kendall Green, came “Home” to Gallaudet University.
Myron revealed that he was extremely nervous about this visit stating “It’s Gallaudet University. What if Deaf people don’t understand my old rusty sign language”. While he insisted upon interpreters throughout his visit which Gallaudet University provided, I noted presentation after presentation a group of fairly bored interpreters. He walked into each new situation signing without voice. To say that our students loved him would be an understatement. Dr. Bob Weinstock, assistant to the Provost and the man who brought my idea into fruition, called Myron a “veritable rock star.” The freshmen class that he initially visited had created questions for him but once Myron began his story, he did not stop and we had to whisk him off to the next event. 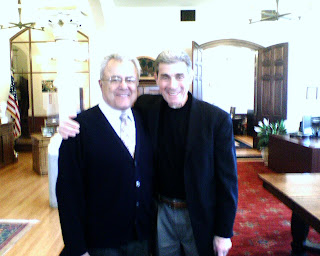 During the luncheon sponsored so graciously by the provost’s office, Myron met faculty and staff members whom I consider to be some of the leading researchers in literature with Deaf Characters. Dr. Cynthia Bailes, librarian Diana Gates, and graduate student Cheryl Shahan were some in attendance. Again, Myron got lost in his story and we had to whisk him away for the campus tour.
For me, the tour given by Ms. Brooke Budzinski, interim coordinator of the Visitors Center was one of the best parts of Myron’s visit. Myron was able to actually see the campus and again and again, he mentioned how beautiful it was and how lovely the people were. Perhaps I overlook our campus’ 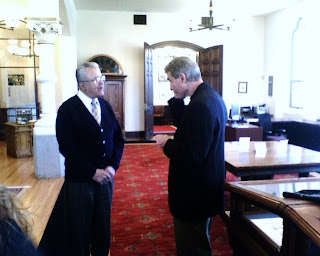 hospitality on a daily basis but everyone signed greetings to Myron throughout his visit. On the tour, Ms. Budzinski shared numerous facts about the campus and its history; I even learned a thing or two. We entered the President’s Office and Myron was introduced to Dr. Davila who spent nearly fifteen minutes discussing the past. Dr. Davila had known Myron’s father. After that, he considered the entire visit a success since Myron’s father, Lou Uhlberg, was one of the main reasons for this visit. At 75, Myron still very much wants to impress his father with his book and his visit to THE University for the Deaf. He told me that seeing the young people signing on campus reminded him again and again of his parents. His visit with Dr. Davila was not the last time that he would become emotional during his stay.

During his visit with Professor Matt Malzkuhn’s class, Myron met a student who was also from Brooklyn. Their regional signs matched and there was no turning back as a newly confident Myron told his story. 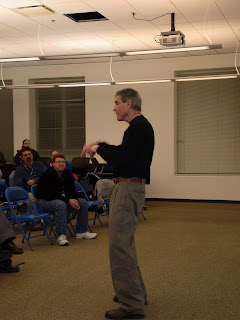 Although he continually asked for new signs, he refused to change his “old” sign for PICTURE and I’m not even sure if he caught it himself when he mumbled in sign “my father taught me that.” I can’t imagine anyone wanting to change him. Male and female college students hugged him at the end of each meeting; children tugged at his limbs and sat in his lap; grown men cried.
There was only a half hour of down time before his evening presentation. While a few technology glitches were resolved, Myron, who confessed that he just found out that he himself had the proud label of CODA, met a young boy with Deaf parents. Myron, oblivious to the crowd of adults who had come to meet him, stopped everything to make a printer’s hat for the boy who had read his books. He showed the boy exactly how his father had folded each piece. After a dynamic presentation where Myron became the characters in his book and only once used interpreters while he read a short excerpt, I suggested going off campus for dinner. It was around 8pm after an impromptu book signing but Myron wanted to stay on campus to see the students. We dined in the Rathskeller among students and a few faculty members. Myron ate a veggie burger and fries. 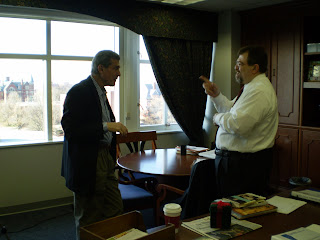 Friday was an early rise. We met for breakfast and with class visits to the students at Kendall and MSSD, Myron already had his newspaper ready. 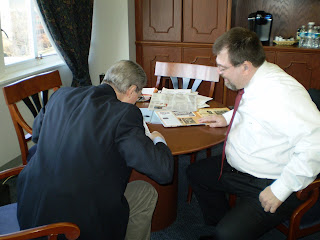 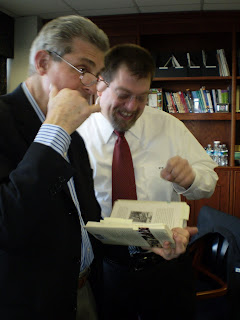 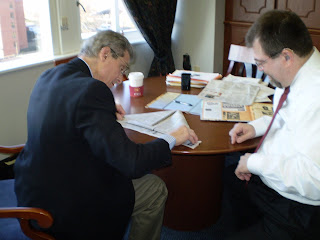 The first stop was a “short” visit to the Provost’s office. Dr. Weiner greeted Myron as a long lost friend. “Call me Steve,” he signed and the two entered the office with possibly the best view of Gallaudet University, if not Washington, D.C. It is impossible to do it justice by documenting the events that occurred during this visit. Dr. Weinstock and I watched two men discuss Brooklyn, their fathers, and while Myron made “Steve” a printer’s hat I believe he channeled one of their fathers. In those moments, men became boys. I don’t think I have ever seen two people so happy nor nostalgic. 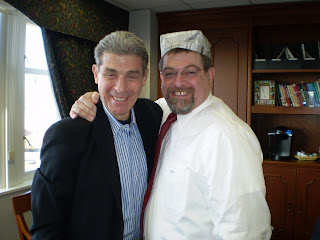 Nearly a half hour late to Ms. Janet Weinstock and Ms. Mary Ann Seremeth’s MSSD class, Myron discussed his books. I was copied on numerous pages reading that we were indeed late but on our way and that from what we have seen Myron Uhlberg would be signing for himself using “Brooklyn Sign Language circa 1940s.” One of my goals of this visit was for others to understand why I loved Myron so much. I did not have to convince anyone once he stepped foot on campus. 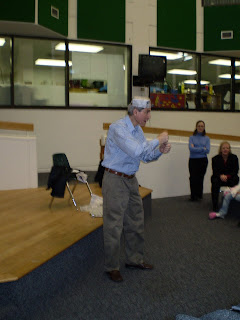 An ardent time keeper, we had one final meet and greet with the children at Kendall Elementary school. An animated Myron teased, made printer’s hats, and showed pictures from his books. It was hard to pull him away from this “presentation” for these were the readers for whom he had written his children’s books.
His last and final stop was the Bison Shop where bookstore manager, Ms. Priscilla O'Donnell, had prepared a book signing along with a beautiful display featuring Myron’s books. When Myron does a book signing, he writes short novels not just his name, shakes hands, and listens to others’ stories. I am so honored to be considered his friend and I don’t think I’ve ever been so proud to be part of Team Gallaudet. 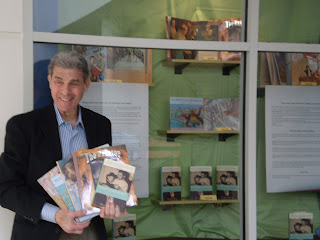 His brief visit had ended. In the car he called his wife and said that this was the trip of a lifetime. Gallaudet had stolen his heart just as I believe he had stolen many of ours. While driving up to the Dulles airport, Myron quoted one of my favorite authors. “F. Scott Fitzgerald wrote ‘There are no second acts in American lives’. Fitzgerald was mistaken.” Myron hugged me and with that, I said goodbye to my friend.

The Wall Street Journal Review: Between Sound and Silence

Check out: Between Sound and Silence: His parents were deaf. He was not. A memoir By DAVID LODGE
Posted by Sharon Pajka,Ph.D. at 1:07 PM No comments: 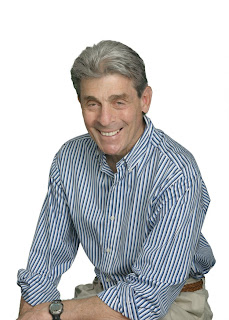 Noted author and CODA Myron Uhlberg will read from his new book, Hands of My Father, on Thursday, February 5, 5-7 p.m., in the Sprint Multipurpose Room, I. King Jordan Student Academic Center.
Autographed copies of the book will be available for purchase through special arrangement with the Bison Shop.
Hands of My Father is a critically acclaimed book about the relationship between a hearing child and his deaf parents. The book, to be published on February 3 by Random House, is one of seven "Best of February" selections on amazon.com. Mr. Uhlberg's previous books include the children's classic Dad, Jackie, and Me, which has won 28 awards. Mr. Uhlberg will visit General Studies classes at Gallaudet and elementary and high school classes at the Laurent Clerc National Deaf Education Center during his two-day visit.

The public presentation on February 5 is sponsored by the Office of the Provost and the Program of General Studies.Come one, come all!
Posted by Sharon Pajka,Ph.D. at 12:18 PM No comments: