Interview with Erin Falligant, author of Joss (American Girl 2020 Girl of the Year) 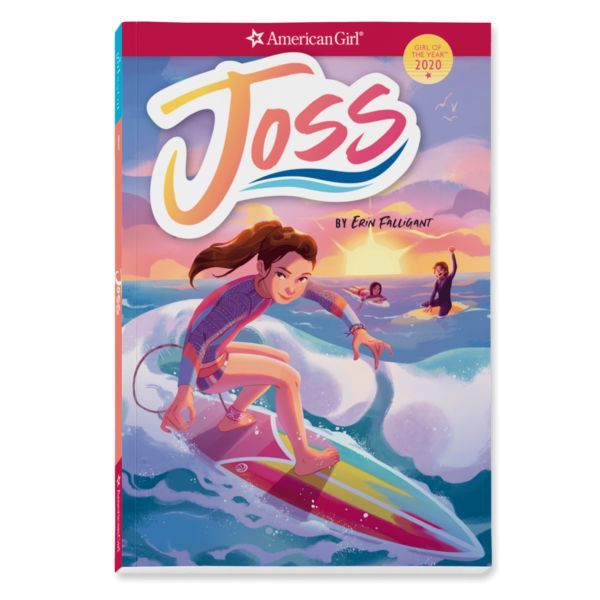 Description:
In this first book of her series, catching waves on her board, Joss is all in, 100%. When the surf's up, she pops out her hearing aid, hops on her board, and paddles into the waves. Joss is stoked to enter a surfing video contest with her surf sister Sofia and Murph the surfing bulldog. If she can master a killer aerial like the frontside air and get her brother Dylan to catch it on video, maybe she'd even have a shot at winning. But Dylan throws her a curve: he dares her to try out for the cheer team. No way -- Joss can't see herself as a cheerleader. (What's with those ginormous hair bows, anyway?) She's 100% surfer girl, and Dylan knows it! Still, if she takes him up on his dare, then maybe he'll help her with her video . . . it's worth a try, right?

Description:
In the second book in her series: Joss Kendrick is always looking for new ways to soar. So when her cheer team needs a new flyer, she can't wait to step up (literally). Her high-flying skills on her surfboard and skateboard make her a natural for the role. But when her skateboarding act at the talent show turns into a total catastrophe -- make that a dogtastrophe -- Joss loses her confidence all around, even at the cheer gym. The cheer competition is coming up fast, though, and her team is depending on her to nail a tricky stunt. The problem is, Joss doesn't trust them not to drop her. She wants to do an easier stunt, but if she plays it safe, can her team still win? And if they don't, will her team ever forgive her?

The first time I talked about American Girl books on this blog was just a year after I started writing about Deaf Characters in Adolescent Literature. I interviewed Megan McDonald, author of American Girl's Changes for Julie (2007), the last in a series of six historical books that take place in the 1970s. The book included Joy, a secondary character who uses sign language and lipreading to communicate.

Nearly a decade later, in 2016, I was contacted by American Girl asking if I would consider being a consultant for a new children’s book series. Of course, I said yes but I had no idea that this would lead to Girl of the Year 2020. It’s been an exciting and super secretive process. 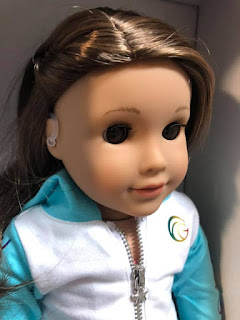 According to the story, Joss was born deaf in her left ear but can hear some out of her right ear when using a hearing aid, which is why the doll comes with a hearing aid, a tiny case, and a cleaning brush.  While the doll and accessories are fun and exciting, the focus of this blog and the inspiration for the doll derives from the books.

Along the way, I met Erin Falligant, the author of Joss (Girl of the Year) (December 26, 2019) and Joss: Touch the Sky (Girl of the Year) (December 26, 2019). I loved the story lines in the books; I loved the character, Joss; and, I liked her relationships with the other characters in the books. Throughout, Joss uses American Sign Language with her family to communicate, especially when she's surfing and not wearing her hearing aid. She also uses lipreading and speech to communicate.

Check out my interview with author Erin Falligant!

SP: Can you share your process to creating the stories for Joss?
EF: I was thrilled when American Girl came to me with the idea for a character who was a lifelong surfer, but who was suddenly challenged to try something new. A character who refused to be defined by her hearing loss or her gender or other people’s view of her as a surf girl who belonged only at the beach. American Girl gave me a framework for Joss’s stories, and I worked to flesh out other characters and plot points that would help Joss grow throughout her series.

SP: Can you tell us a bit about your process?
EF: One of my favorite exercises is to come up with characters who challenge Joss because they’re so different from her. Joss is a girl who works hard to be taken seriously when she’s out on the waves, so I wanted her brother Dylan to be a guy who works equally hard for a laugh (often at Joss’s expense!). Joss is most comfortable with wet hair and a swimsuit and flip-flops, so her rival at the cheer gym (Mila) became the girl who’s all buttoned up and who wrinkles her nose at what she thinks are “grungy” surfers. I had a lot of fun with these two characters, because they give Joss the most grief but also push her to figure out who she is and to grow.

SP: What research did you do to make your characters believable?
EF: Almost immediately, I began working with an advisory board of experts: two professional female surfers, one of whom is deaf; owners of a competitive cheer gym; and an audiologist who works with deaf students and students with hearing loss within the educational system. I watched countless surf videos taken with GoPro cameras attached to the boards so that I could almost imagine what it might be like to pull off an aerial surf trick or ride through a barrel wave. I also began sitting in on cheer practices, watching girls master (and sometimes struggle with!) the same skills Joss learns when she joins the gym. Just stepping into the cheer gym was hugely helpful, because I was immediately blasted by sound: shoes squeaking on the mat, voices bouncing off the walls, and music blaring. I knew instantly that this environment would be tough for Joss, who is deaf in one ear and has hearing loss in the other.

After a draft of the stories were written, my editor and I worked closely with Gallaudet University (thank you, Dr. Pajka!) to make sure we were portraying Joss as a girl who views the world from a visual standpoint rather than from an auditory one. Dr. Pajka helped me think about when Joss might use ASL rather than spoken language, such as when she’s home with her family or with her best friend. We also worked hard to describe some of the ways Joss might position her body in order to better hear, such as turning toward the speaker, sitting across the lunch table from her best friend, and focusing on facial expressions when background noise interferes with hearing. Our goal was to make sure that deaf readers or readers with hearing loss could relate to Joss’s experience, and that hearing readers would be inspired by and learn from her experience.
SP: What was your favorite part of creating the stories?
EF: I adore dogs, so I had great fun researching Joss’s pet, Murph the Surf Dog. (Yes, surfing bulldogs are a real thing!) It turns out that bulldogs are natural surfers because they have short legs and a low center of gravity. They balance well on boards and have super strong jaws, which allow them to carry their surfboards into the water. Bulldogs aren’t great swimmers, though, so we always made sure to mention Murph’s doggy life vest during surfing scenes in the books!
SP: I’m totally a dog person. Murph is one of my favorite characters. I had to have him and the surf package to go along with my American Girl doll. His vest is adorable.

SP: What do you hope readers will take away or learn from Joss books 1 and 2?
EF: I’d love for readers to be inspired by Joss to try something new. Even 9- and 10-year-olds can start feeling like it’s too late to try a new sport, and that’s just not true. Crossing over into other sports can make you a better athlete all around and help you form some new friendships too. Is it hard to step out of your comfort zone? Yes. Will you make a few mistakes when you’re trying something for the first time? Of course! But it’ll be so worth it. My hope is that through reading Joss’s books, readers will ask themselves, Is there something new that I’ve been wanting to try? And that Joss will inspire them to go ahead and do it. Each time you try something new, it’ll be that much easier to swallow your fear and try the next new thing. And imagine the fun and exciting places that might lead you!

SP: That’s awesome. Finally, what advice do you have for young readers?
EF: I encourage readers to fuel their passion with books they love. There are so many amazing books out there. I’m not a writer who believes you have to finish every book you start (unless, of course, it’s required reading for school!). If a book doesn’t speak to you, set it down and search for something that does. Tell teachers and librarians what your favorite books are, and ask them to recommend similar books. That way, in your free time, you’ll be reading books with characters and storylines that make you want more. 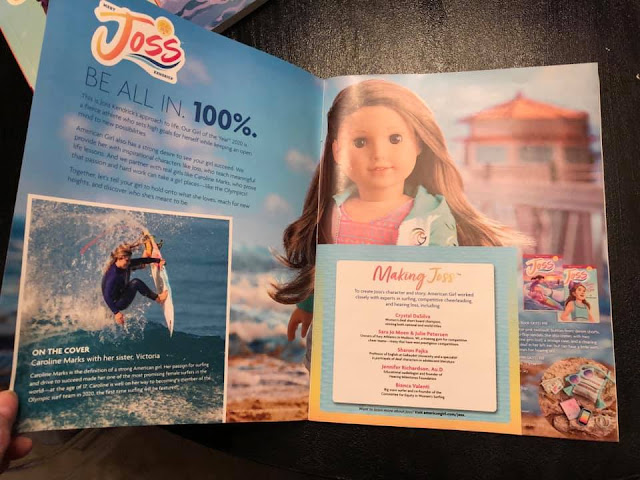 For more information about American Girl and to learn more about Joss’s story, please visit the website: https://www.americangirl.com/discover/meet-joss