The Immortal Life of Henrietta Lacks by Rebecca Skloot

Across the nation, universities are announcing their 2010 Common Reading selection. Many of them have selected The Immortal Life of Henrietta Lacks, by Rebecca Skloot. Gallaudet University is no exception. Skloot's book has made its way into national and local papers, has become a best seller, and has library patrons waiting in haste! 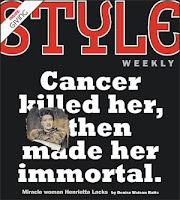 At Gallaudet University, on February 24, 2010 as part of her national book tour, Skloot recounted the story of the late Henrietta Lacks, a woman scientists are familiar with based only on her cells since they were the first "immortal" human cells grown in culture. The visit was an emotional one for the author, who learned that in the 1950s, Gallaudet housed a school for black deaf students. Henrietta Lacks's children, some of whom were deaf and hard of hearing, lived in Baltimore during that time, yet the family was never aware of the school or a similar one in Baltimore. Instead, the children barely learned how to read and write after attending public schools that never accommodated their needs.
Gallaudet University's Denison House, a new student housing project that places a faculty member and graduate student with undergraduate students, will use The Immortal Life of Henrietta Lacks as the centerpiece of its bioethics theme during the coming year.

While this isn't a traditional selection for my blog, it's a fascinating story that involves deaf individuals. I will post more about this during the year once the author visits campus.

My Sister's Voice by Mary Carter

Product Description
A proudly deaf artist in Philadelphia, Lacey Gears is in a relationship with a wonderful man and rarely thinks about her childhood in a home for disabled orphans. That is, until Lacey receives a letter that begins, 'You have a sister. A twin to be exact'. Learning that her identical, hearing twin, Monica, experienced the normal childhood she was denied resurrects all of Lacey's grief, and she angrily sets out to find Monica and her parents. But the truth is far from simple. And for every one of Lacey's questions that's answered, others are raised, more baffling and profound. "My Sister's Voice" is a beautifully written novel about sisterhood, love, and the stories we cling to until real life comes crashing in.

Yes, I know! I'm behind! This book was published in February and I'm *just* now getting around to posting it here and I haven't even read it! But that doesn't mean I didn't know about it... especially since many of you kind readers hounded me about it:) Writing that it's been a hard year would be an understatement.... and since this isn't a tell-all blog, I'll just keep my excuses to myself and hold my head in shame (or at least in a book for the remainder of the summer).

Without reading the book, I can tell you why I want to read it.... one, the author includes an adorable prom picture of himself with his then girlfriend/ now wife. Later, they would be in a punk band together (okay, that's really two things); three, the author admits on his website that he did a little research. He writes, "I began to research Deaf culture and found it fascinating!" Immediately I'm wondering what kind of research.... I've already sent him an email so hopefully we'll find out (and if he reads this post-- please respond! hint hint), and four, on his website he wrote, "So I decided that I would write a mystery -- something dark and full of ghosts and murder -- using the big party and deaf narrator and the coal mining setting". I like all that is dark; I like ghosts and murder; you all know I like deaf characters, especially narrators; and, my father grew up in the coal mining community of Wilkes-Barre, PA (my grandfather was a miner) about an hour from where Mr. Berk was born. 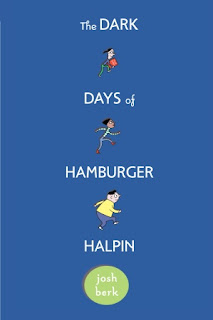 
About the Book:
Being a hefty, deaf newcomer almost makes Will Halpin the least popular guy at Coaler High. But when he befriends the only guy less popular than him, the dork-namic duo has the smarts and guts to figure out who knocked off the star quarterback. Will can’t hear what’s going on, but he’s a great observer. So, who did it? And why does that guy talk to his fingers? And will the beautiful girl ever notice him? (Okay, so Will’s interested in more than just murder . . .)


Those who prefer their heroes to be not-so-usual and with a side of wiseguy will gobble up this witty, geeks-rule debut.