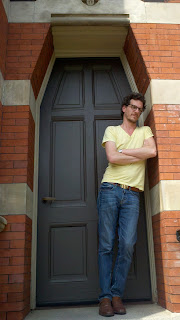 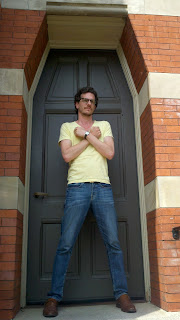 Author Brian Selznick likes R-hand shaped signs such as RULES, an R-lettered word I can't recall, and SARCASTIC (huh? Yep, I think he was just on a roll naming his favorite signs by that point). He does not care for signs on or around the nose liked BORED or FLOWER. How do I know this, you ask? Brian Selznick is at Gallaudet University taking an ASL course. *Insert professional Squeal here* 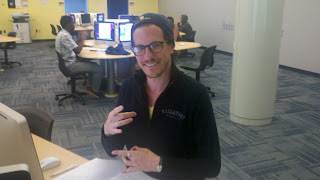 When I interviewed him in January, I did so via email since he was traveling for the premiere of the movie Hugo. Yesterday was the first time I actually *met* him in person. After arranging to meet for lunch, I bumped into him that morning in the student center while he was studying with a group of ASL students. Instantly it felt like we were old friends hugging for a greeting and laughing from the start. Our lunch date, which I call it that because he IS my current professional crush, would include a juicy insider tip which he quickly noted that I could not blog about... But he didn't say I couldn't blog about not blogging about it so HA Brian Selznick! There! I am NOT telling your secret! To be fair, I told him a little something I wouldn't want him to share either plus I asked for the biggest favor ever and he said no! *gasp* Even after I told him who the girl is in the statue in front of campus **Spoiler Alert for new ASL students doing their homework... Her name is Alice ;p**

Even without promising to take me to any future Oscar red carpet events, I still like this guy! I showed him Gallaudet's infamous "coffin door" after making him climb over a small wall in 90 degree weather. I was in a dress and completely forgot I was a tenured professor and should be acting professional. Selznick looked like any other student-- Gallaudet jacket and Gallaudet hat. He only wore the hat outdoors for the picture. I would like to say that I talked him into posing Nosferatu-style in front of the coffin door because I teach a vampire course but really I just like people to pose silly for pictures. After several *cool* pictures, he fell for my charm (read that as I badgered him into it) and posed.

When I asked him why he was taking ASL classes I wondered if it had something to do with his book Wonderstruck. In fact, it did! After doing research, he has made some close friends who are Deaf and he said he really just wants to communicate with his friends (and potential new friends) using ASL. He talked about the importance of the Deaf Community and Deaf Culture... And again I would like to emphasize my professional crush. *Insert professional Squeal here* For most of our conversation, Selznick used ASL. For a writer of English and a new signer, he seems oddly comfortable using his non-native language. 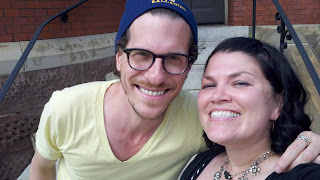 Selznick is already working on another book but it is probably too soon to tell if a Deaf Character will sneak his or her way into his writing. *crosses fingers* After the success of Wonderstruck and a literal world wind adventure of Hugo the movie, he doesn't have much *time off* so for him to decide to learn ASL on his free time says something about his character; for him to come to Gallaudet for a two week intensive ASL course... Well, that reveals just a little bit more I would think.


He's fun; his books are fun; he's extremely down to earth and humble (He didn't even tell his ASL class peers he was THE Brian Selznick!). And I hope, hope, hope we'll cross paths in the future.
Posted by Sharon Pajka,Ph.D. at 9:40 AM 1 comment: