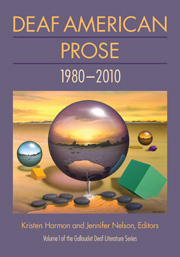 From the publisher:
The First Volume in the Gallaudet Deaf Literature Series
In Deaf life, the personal narrative holds sway because most Deaf individuals recall their formative years as solitary struggles to understand and to be understood. Few deaf people in the past related their stories in written form, relying instead on a different kind of “oral” tradition, that of American Sign Language. During the last several decades, however, a burgeoning bilingual deaf experience has ignited an explosion of Deaf writing that has pushed the potential of ASL-influenced English to extraordinary creative heights. Deaf American Prose: 1980–2010 presents a diverse cross-section of stories, essays, memoirs, and novel excerpts by a remarkable cadre of Deaf writers that mines this rich, bilingual environment.
The works in Deaf American Prose frame the Deaf narrative in myriad forms: Tom Willard sends up hearing patronization in his wicked satire “How to Write Like a Hearing Reporter” Terry Galloway injects humor in “Words,” her take on the identity issues of being hard of hearing rather than deaf or hearing. Other contributors relate familiar stories about familiar trials, such as Tonya Stremlau’s account of raising twins, and Joseph Santini’s short story of the impact on Deaf and hearing in-laws of the death of a son. The conflicts are well-known and heartfelt, but with wrinkles directly derived from the Deaf perspective.
Several of the contributors expand the Deaf affect through ASL glosses and visual/spatial elements. Sara Stallard emulates ASL on paper through its syntax and glosses, and by eliminating English elements, a technique used in dialogue by Kristen Ringman and others. Deaf American Prose features the work of other well-known contemporary Deaf writers, including co-editor Kristen Harmon, Christopher Jon Heuer, Raymond Luczak, and Willy Conley. The rising Deaf writers presented here further distinguish the first volume in this new series by thinking in terms of what they can bring to English, not what English can bring to them.
Kristen Harmon is Professor of English, Gallaudet University, Washington, DC.
Jennifer Nelson is Professor of English, Gallaudet University, Washington, DC.

Outcasts and Angels The New Anthology of Deaf Characters in Literature, (September 2012) 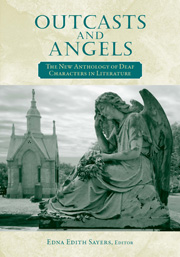 In 1976, Trent Batson and Eugene Bergman released their classic Angels and Outcasts: An Anthology of Deaf Characters in Literature. In it, they featured works from the 19th and 20th centuries by well-known authors such as Charles Dickens and Eudora Welty. They also presented less-well-known deaf authors, and they prefaced each excerpt with remarks on context, societal perceptions, and the dignity due to deaf people. Since then, much has transpired, turning around the literary criticism regarding portrayals of deaf people in print. Edna Edith Sayers reflects these changes in her new collection Outcasts and Angels: The New Anthology of Deaf Characters in Literature.
Sayers mines the same literary vein as the first volume with rich new results. Her anthology also introduces rare works by early masters such as Daniel Defoe. She includes three new deaf authors, Charlotte Elizabeth, Howard T. Hofsteater, and Douglas Bullard, who offer compelling evidence of the attitudes toward deaf people current in their eras. In search of commonalities and comparisons, Sayers reveals that the defining elements of deaf literary characters are fluid and subtly different beyond the predominant dueling stereotypes of preternaturally spiritual beings and thuggish troglodytes.
Outcasts and Angels demonstrates these subtle variations in writings by Ambrose Bierce, Isak Dinesen, Nadine Gordimer, and Flannery O’Connor. Stories by Juozas Grušas, Julian Barnes, and many other international authors broaden the scope of this updated inquiry into the deaf literary character. Sayers’ preface and closing essay bring any disparate parts together, completing Outcasts and Angels as a fitting, contemporary companion to the original classic collection.
Edna Edith Sayers is former Professor of English at Gallaudet University, Washington, DC.

Lynn McElfresh's, author of Can You Feel the Thunder?(1999), forthcoming publication Strong Deaf

I am really excited about Lynn McElfresh's, author of Can You Feel the Thunder?(1999), forthcoming publication Strong Deaf. Two years ago, almost on the exact date, the author contacted me to review her manuscript. Because I read the manuscript, I don't want to make any further comments until I see the actual book but be sure you'll read more posts from me about this book. 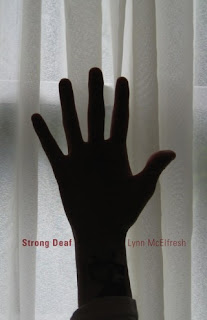 Every Friday, we drive two and a half hours to Bradington to where my sister Marla goes to residential school for the deaf. I told Mom that when I go to Bradington, I hoped I would get to stay on the fourth floor just like Marla.

”Silly,” she signed. “You no go Bradington. You not deaf.” Of course I knew I could hear, but what did that have to do with anything?

Jade is the only hearing member in her family. Her older sister gets to go to the school for the deaf headed by her grandfather Gilbert, but Jade feels left out. Marla thinks her little sister is a pest and a brat. When they end up on the same softball team for the summer, neither is happy about it. Jade, the smallest player on the team, is assigned to be the catcher. It looks like it’s going to be a long season. As sisters, they are often at loggerheads, but as team mates Jade and Marla have to find ways to get along. In spite of their differences, they soon discover that each has a lot to offer the other.
Posted by Sharon Pajka,Ph.D. at 8:10 AM No comments: