In June 2008 I had the pleasure of interviewing Meg Burden about her book Northlander. Since that time, Ms. Burden's book has received many notable awards including "Book of the Year, YA Fiction" by ForeWord Magazine  and "Notable YA Fiction" by the International Reading Association.
I'm very excited to read this new selection in the Tales of the Borderlands. Deaf Character, Finn, apparently has a much larger part in the sequel. The book will be published in April but I should receive an advance reader from the publisher any day now. I'll let you know what I think!

Product Description
In this eagerly awaited sequel to NORTHLANDER, THE KING COMMANDS: Tales of the Borderlands Book Two, Ellin Fisher, now a Healer, must choose between her love for the young Northlander king and her duty to her own people, the Southlings, who are feared and hated in the North.

From the Publisher
The Northlands are in turmoil, divided by those who support King Alaric's decrees welcoming the Southlings and their magic, and those who will stop at nothing to send them back to the Southland where they belong. But the Southland, too, is being torn apart as the Southlings with mental gifts and healing magic are hunted by the mysterious Guardians, captured and never heard from again.

As the legendary peace of the Southland crumbles and the throne of the Northlands is challenged, Ellin Fisher, the powerful young Southling who befriended the Northlands royalty, must make a terrible choice. Is it her destiny to fight for equality in the Northlands, or to embrace her calling as a Healer and help other True Southlings escape from the Guardians who killed her family? In the midst of this, while the home she's chosen and the land she left behind both stand poised on the brink of civil war, Ellin must choose where her heart lies, as well. She loves King Alaric, but will Princess Nathalia, another newcomer to the Northlands, stand in the way?

Loyalty and romance, secrets and destinies, threaten to tear Ellin and her newfound family in the Northlands apart, especially when a loved one betrays her and old enemies become new friends. Only one thing is certain: the Borderlands will never be the same again.
Posted by Sharon Pajka,Ph.D. at 12:45 PM No comments: 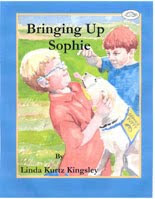 
Mike and Pete are once again working together on a project! Mike, who is deaf, and his family are raising Sophie who will one day become a service dog for someone with a disability. Again, Pete and Mike learn to communicate and work together using signs and speech. 24 signs to learn and a puppy to enjoy!


In October 2008, I interviewed author Linda Kurtz Kingsley about her book, Signs of Jays. Here is a sequel, Bringing Up Sophie. The story concerns two friends, one Deaf character who attended a public school mainstreaming program, and his hearing friend. Both help raise a service pup that goes to school and later to a person with a disability. The book is beautifully illustrated in water colors and includes 24 new ASL signs.


To purchase this book, visit http://www.jasonandnordic.com/
Posted by Sharon Pajka,Ph.D. at 6:50 AM No comments: