Anime film, A Silent Voice, will be subtitled for Japanese viewers


Rocket News 24 reported today that an anime film about a bullied deaf girl will be shown in theaters with subtitles for Japanese audiences. Don’t get too excited; this is only being screen in Japan with Japanese subtitles but it is excellent news that the producers of A Silent Voice are starting to see that they have fans just like the series’ female lead who is Deaf.

“Manga creator Yoshitoki Oima’s A Silent Voice, titled Koe no Katachi (literally “The Shape of Voice”) in Japanese, begins with a new student transferring into elementary school student Shoya’s class. His new classmate is a deaf girl named Shoko, and as is sadly, yet often, the case, that difference makes her the target of bullies, with Shoya acting as the ringleader of her tormenters.

But bullying just leads to more bullying, and eventually the vicious circle comes back around and Shoya finds himself on the receiving end of taunts and jeers. Unable to form a lasting friendship throughout elementary and middle school, upon entering high school Shoya resolves to make amends for mistreating Shoko when they were younger, and the story follows his attempts at redemption and the challenges that arise along the way.

The manga began serialization in 2013, and has attracted enough critical and popular acclaim that it’s being adapted into a theatrical anime by the talented team at Kyoto Animation, with its opening scheduled for September 17. The trailer looks impressive, filled with the sort of careful yet emotional character animation that the studio has become known for.

But while nice visuals are always a plus, it’s the story of A Silent Voice, and its willingness to have a deaf character play a key role, that’s won praise for the franchise. As such, it’s only fitting that theaters nationwide will be showing the film with Japanese subtitles, for the benefit of the hearing impaired.

Making this move particularly surprising is the fact that most televised anime in Japan is broadcast without closed captions. Likewise, the majority of anime DVDs lack Japanese subtitling, preventing deaf fans viewers from fully enjoying a huge portion of the country’s animation output.
The decision to accommodate deaf audiences in a film featuring a deaf character is somewhat evocative of 2015 anime Miss Hokusai, in which the protagonist’s younger sister is blind. Japanese home video versions of the film include an audio option in which a narrator describes the on-screen settings and action for those who cannot see.” 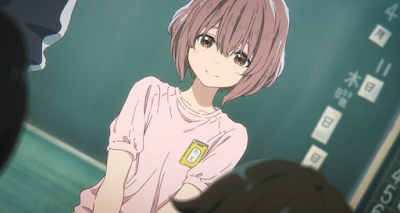 All of the theaters that are scheduled to show A Silent Voice will show the subtitled version once a day at each of the locations between September 24 and 30. If you're in Japan and fluent in Japanese, this is excellent news. For the rest of us, we'll have to wait to see if this becomes available online.
Posted by Sharon Pajka,Ph.D. at 12:53 PM No comments: