The Dark Days of Hamburger Halpin [Paperback] by Josh Berk 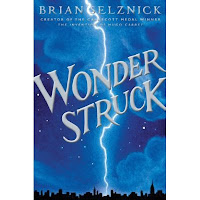 Brian Selznick is the illustrator of "Frindle" by Andrew Clements, and the author of "The Houdini Box," winner of the 1993 Texas Bluebonnet Award.


Banjo on Alldeaf.com writes that the book "features at least two Deaf characters. Carol Padden and Tom Humphries, two Deaf scholars helped the author fine-tune the experience of the Deaf Culture to ensure that it was true to the core."
Thanks to Nancy C. for pointing out the NY Times Review A Deaf Boy’s New York Quest.

Amazon.com Review
Amazon Best Books of the Month, September 2011: In a return to the eye-popping style of his Caldecott-award winner,The Invention of Hugo Cabret, Brian Selznick’s latest masterpiece, Wonderstruck, is a vision of imagination and storytelling . In the first of two alternating stories, Ben is struck deaf moments after discovering a clue to his father’s identity, but undaunted, he follows the clue’s trail to the American Museum of Natural History, in New York City. Flash to Rose’s story, told simultaneously through pictures, who has also followed the trail of a loved one to the museum--only 50 years before Ben. Selnick’s beautifully detailed illustrations draw the reader inside the museum’s myriad curiosities and wonders, following Ben and Rose in their search for connection. Ultimately, their lives collide in a surprising and inspired twist that is breathtaking and life-affirming. --Seira Wilson