New Book: Return of the Lion People by Michael Milone 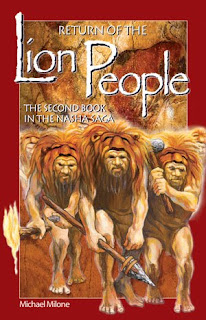 The Deaf Character is introduced in the second chapter.


Arena Press announces The Return of the Lion People, the second book in the Nasha series.
The Wolf Clan faces a terrifying enemy in the second installation of Michael Milone’s Nasha series. The Lion People, a marauding clan that had disappeared for a generation, returned and continued their violent ways. Despite the valiant efforts of defenders, the warriors of the Lion People kidnap many of the Wolf Clan’s women and children. Given their almost impenetrable lair, the Lion People have little fear of a rescue attempt. Moreover, as a peaceful tribe, the Wolf People have little chance against such a formidable enemy.
Available at bookstores and online through amazon.com and other distributors, Lion People shows the contrast between a hunter-gatherer clan and a warrior clan in the same region. “Humans have adapted in many ways,” says Dr. Michael Milone, a research psychologist. “Our family tree has many branches, from peaceful clans who spent most of their time developing survival skills to aggressive groups that preyed on others.”
Some new characters are included in this sequel, including a remarkably resilient and capable deaf woman and her two daughters. In addition, the blind storyteller, Checo, shows a surprisingly contemporary ability that young readers will enjoy learning about.
“It has long been assumed that ancient humans simply abandoned children with disabilities or they perished from natural events. I find this difficult to accept because humans 15,000 years ago were so much like us today,” admits Milone. “The notion of abandoning a child would be impossible for most of us, and I have no doubt that many disabled young people survived to adulthood and contributed to the society in which they lived.”
As was true in Nasha: The First Dog, the wolves are not harmed in Lion People, and they contribute in a unique way to the climax. Some of the clan members are not so lucky and die while attempting to defend the village. “I wanted to introduce young readers to the practice of treating the dead with respect, a practice that is as old as humans themselves. I agree with the British statesman William Gladstone that a society can be measured by the manner in which it treats its dead, and I think young readers will appreciate not only the ceremonial burial, but also the discussion that follows.”
The focus of this work is more on the humans than the wolves, a departure from the first book in the series. “Although the wolves play an important role in the story, it is more about how the members of the Wolf Clan interact with one another and other clans as well as respond to an enormous threat from the Lion People. A high level of action is maintained throughout the book, and more of the discoveries of humans are introduced. As was true with the first book, the underlying message is that humans fifteen thousand years ago were intelligent, persevering, and caring people. Our human journey is a remarkable story, and I hope that young readers will feel a sense of pride in what our ancestors accomplished.”
The lives of humans have been enriched for a thousand generations because of our association with dogs, and nowhere is the genesis of this relationship told more eloquently than in the first book in the series, Nasha: The First Dog. A determined girl adopts an abandoned wolf pup. This simple act of kindness changes the life of her clan. Nasha, as she names the wolf, is the catalyst for some of the discoveries that the members of the clan make, discoveries that in the millennia to come will form the foundation of civilization.


Michael Milone, Ph.D., is a nationally recognized research psychologist and award-winning educational writer who began his career as a teacher in general and special education. He earned a Ph. D. in 1978 from The Ohio State University, holds a Master of Arts degree from Gallaudet University, and is fluent in American Sign Language. He lives in New Mexico with his wife, Sheri, and a houseful of dogs and cats. He has completed more than thirty marathons and two Ironman races, although he confesses that his knees are reluctant to continue with such madness. Dr. Milone is available for interviews and select personal appearances. He may be reached at 505-867-0276 or MMilone@aol.com.
Arena Press is an imprint of Academic Therapy Publications. For more information about both companies, please visit our Web site at academictherapy.com. For more information about this book, visit nashathefirstdog.com.


SYNOPSIS:
Amy Kellen has a new job as a sign language interpreter for All Hands Video Relay Service (VRS), enabling routine telephone calls between the deaf and hearing communities. When a political strategist dies during a video call Amy discovers she was not an observer, but rather the unwitting trigger of a political assassination. Can she save herself, her daughter, and her code of silence when the assassins come for her?