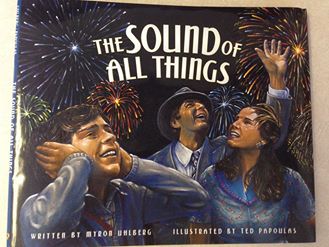 I cannot believe it’s been seven years since I saw my friend Myron Uhlberg. In 2009 after a whirlwind of events over his memoir, Hands of My Father, Uhlberg finally came home to Gallaudet University. I’m pretty proud that I helped make that happen.

He touched so many of our students and community members. I saw the former provost shed a tear when Uhlberg and he spoke of their fathers who were both from Brooklyn.

I encourage you to search his name in the top left corner of this blog to share in the experience.

Last year Myron emailed me about his life and his forthcoming children’s book, The Sound of All Things. In his email, he wrote,

“The book is scheduled for publication March 1, 2016, to coincide with Deaf History Month.  Which is most fitting—since SOAT (and its two sequels) cover a crucial period in that history.”

Of course he planned it this way. His love for the Deaf Community resonates in all of his publications. I could go on and on about what a beautiful human he is but I’m supposed to be reviewing his new book.

I'm afraid this is going to be more of an open letter from a fan girl. 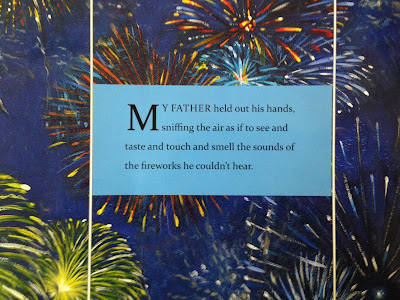 I cried when I received it. Before I even opened the package, I teared up because I know the story. Here is a man who in his later years (ha, he’ll give me the stink eye for that phrase) he’s still writing about his parents. I once read that our loved ones who have passed are kept alive when we remember them. Myron’s parents are looking down at him still and beaming with pride over their son.

The Sound of All Things is the story of the hearing boy with Deaf parents. They go to Coney Island and one of the first scenes is the boy and father riding a roller coaster. The father asks the son to describe what things sound like and through Sign Language the son does his best… but how does one describe such things as the waves. In all good children’s books and in life, the best way to answer this question is to ask a librarian. So the young boy goes to the library, finds the more-than-competent librarian who finds a book of poetry. “Some of the poems are about the ocean”, she tells the young boy (no citation since my review copy does not have page numbers). They find the perfect passage. 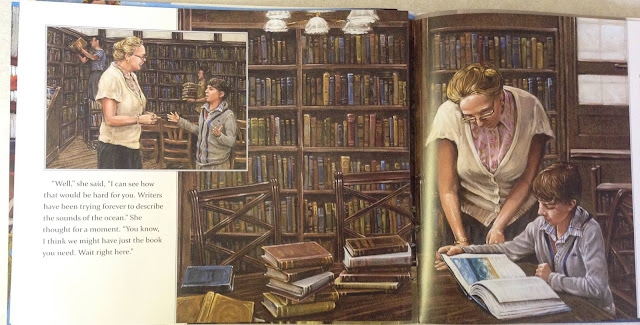 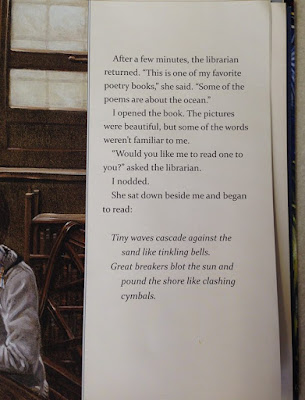 I don’t want to give away all the precious details of the story but it ends with the visuals of fireworks and a young boy reading a library book so that he can share another aspect of his world with his father.

Myron ends his book with a note from the author. 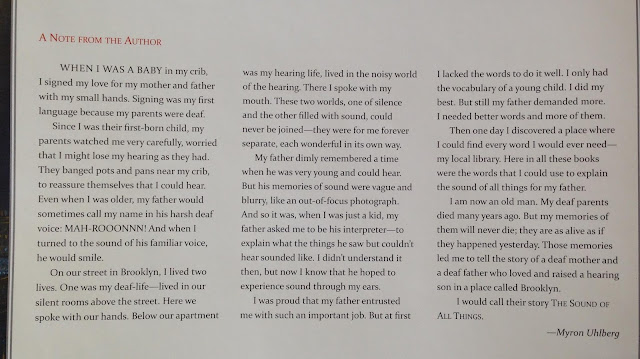 I'll end with this. Myron, I miss you. We miss you!  And, we do look forward to you coming home again.


Author Alan Balter is a retired university professor. In an email message to me in November 2014, he writes:


I wrote Different Ways of Being with mature young adults and new adults in mind, although I believe the characters and plot are fully realistic and will be enjoyed by older readers as well... The protagonist is a young man, Deaf of Deaf, who attends Gallaudet University, and through his character, readers learn about essential elements of Deaf Culture, including American Sign Language and residential schooling.

I received the book over a month ago and am looking forward to reading it and interviewing the author. For now, here is a description. 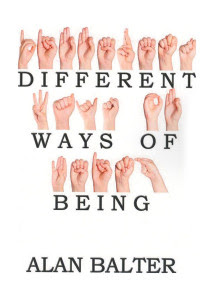 Different Ways of Being (November 2015) by Alan Balter

From Linkville Press: For Willa and Robert, it’s a quiet time. The sky takes on a greenish hue, and great bolts of lightning zigzag overhead. The rumble of thunder vibrates through the floor, and trees bend against the wind. Hailstones, some the size of marbles, pepper the windows and fracture on the driveway and sidewalks. Shutters flap against the siding. Soon, the street is littered with tree branches, roofing shingles, and assorted trash. A riderless tricycle blows by in odd concert with a trash can and a soccer ball. The noise is considerable, but for Willa and Robert, it’s a quiet time. It’s always a quiet time. So begins Different Ways of Being, Alan Balter’s strong and sensitive novel about people who are Deaf. Willa and Robert are congenitally deaf and members of the Deaf Culture. They communicate with American Sign Language and prefer to socialize with other Deaf rather than interact with people who hear. For them, deafness is not a disability; thus, they don’t want to hear any more than hearing people want to be deaf. They consider marriages between deaf and hearing people to be “mixed marriages” that are destined to fail. So strong are the beliefs of members of the Deaf Culture that many would choose to abort a pregnancy rather than have a hearing child.
Posted by Sharon Pajka,Ph.D. at 7:53 AM No comments:

Thanks to Megan for bringing these to my attention.

’I'm always trying to figure out what's really going on. Always having to fill in the gaps, but never getting all the details. It's like trying to do a jigsaw when I don't even know what the picture is, and I'm missing one of the vital middle pieces.’  How do you know if your friends are talking about you behind your back or if a boy likes you? They could act innocent, but you'd know from the rumours. You'd hear the whispers. But what if you couldn't hear those whispers anymore? What if everything you took for granted was gone? Being a teenager is hard enough. But being a deaf teenager? Demi lost her hearing through meningitis and has transferred to a school for the hearing impaired. Whisper deals with the usual teenage struggles, but with extra frustrations and challenges thrown in. The politics of deafness are interwoven into a very readable and engaging story.

Philip is dyslexic and mildly deaf. He has been raised by his grandmother and is treated as stupid by his classmates. Jack Mackinnon is the star of the school and uses bullying to maintain his power. When the class is set the task of researching heroes and villains, the social order starts to unravel. As Philip emerges from invisibility, he is revealed to have true courage.

A lyrical description of how a deaf child treasures her silent world and how it is changed by a cochlear implant, which she sees at first as 'the intruder'. She shares her love of this world, and her feelings about discovering sound. With the story addressed to the intruder in her ear, this is a powerful narrative of confusion and, finally, acceptance.