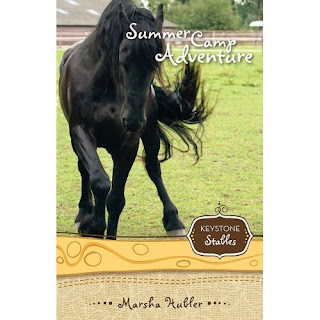 Product Description
For the summer, Skye and her school friend Chad work at special needs Camp Penn’s Woods. Skye runs into a brick wall when she tries to teach Jonathan Martin, a young deaf boy, how to ride Buddy western style, but Jonathan insists on riding him English. When Jonathan and Buddy disappear into the mountains, Skye and Chad lead the rescue to find him.

From the Back Cover
For the summer, Skye and her friend Chad work as teen counselors at special needs Camp Penn’s Woods. Jonathan Martin, one of the campers who is deaf, causes havoc during his riding lessons because he insists on riding English style when Skye tries to teach him western. Skye, who knows American Sign Language, tries to communicate with him, but he is stubborn and refuses her help and friendship. When Jonathan and his assigned mount Buddy, a black gelding, disappear into the hills, Skye and Chad have to lead the rescue to find him.

Marlee Matlin will sign copies of her new autobiography, I'll Scream Later, on Saturday, May 16, noon, at Borders, 1801 K Street, NW, Washington, D.C. To read an excerpt of her book, click here.


Note: While Matlin has published books for young adults, this is intended for adults and mature teens.

Product Description
Critically acclaimed and award-winning actress Marlee Matlin reveals the illuminating, moving, and often surprising story of how she defied all expectations to become one of the most prolific and beloved actresses of our time.
Marlee Matlin entered our lives as the deaf pupil turned custodian audiences fell in love with in Children of a Lesser God, a role for which she became the youngest woman ever to win a Best Actress Oscar. More than twenty years after her stunning big screen debut, the Golden Globe- and Emmy-nominated actress is an inspirational force of nature -- a mother, an activist, and a role model for millions of deaf and hard-of-hearing people around the world.
In I'll Scream Later, Marlee takes readers on the frank and touching journey of her life, from the frightening loss of her hearing at eighteen months old to the highs and lows of Hollywood, her battles with addiction, and the unexpected challenges of being thrust into the spotlight as an emissary for the deaf community. She speaks candidly for the first time about the troubles of her youth, the passionate and tumultuous two-year relationship with Oscar winner William Hurt that dovetailed with a stint in rehab, and her subsequent romances with heartthrobs like Rob Lowe, Richard Dean Anderson, and David E. Kelley.
Though she became famous at the age of twenty-one, Marlee struggled all her life to connect with people, fighting against anyone who tried to hold her back. Her own mother often hid behind their communication barrier, and Marlee turned to drugs before she even started high school. However, she found in acting -- with the encouragement of her mentor, Henry Winkler -- a discipline, a drive, and a talent for understanding the human condition that belied her age and her inability to hear. By the time Hollywood embraced her, she had almost no formal training, a fact that caused many other deaf actors to give her the cold shoulder, even as she was looked upon as a spokesperson for their community.
She has played memorable roles on wildly popular television shows such as Seinfeld, The West Wing, and The L Word, danced a show-stopping cha-cha-cha on Dancing with the Stars, and now, with uncompromising honesty and humor, Marlee shares the story of her life -- an enduring tale that is an unforgettable lesson in following your dreams.

Also, check out the author's website for news, bio, and contact information. You can also read my interview with the author last May!

From Publishers Weekly
As Stolzman's character-driven debut opens, eight-year-old Anna Levy and her mother witness a horrific scene: the small boat that her five-year-old sister, Megan, is on with their father capsizes close to shore, and Megan drowns. In the immediate aftermath, Anna blames herself for not plunging into the water and joining the frantic search. She begins an imaginary, one-sided conversation in sign language with Megan that leads the grown-up Anna to adopt a deaf five-year-old (whom she mistakenly renames "Adrea" by incorrectly signing "Andrea") and to a career working with deaf children. As Anna and Adrea grow into their lives together, watchful Anna is forced to confront ghosts from her past and to learn to stop living life as a spectator. Stolzman gives Anna a poetic soul ("words of sympathy had exhausted my tolerance for words themselves"), and a carefully constructed redemption that unfolds with vivid observational detail.

New Publication- Longshot: The Adventures of a Deaf Fundamentalist Mormon Kid and His Journey to the NBA 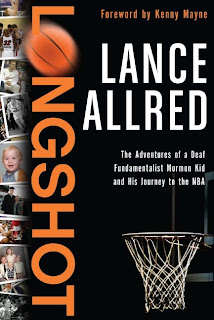 Longshot:The Adventures of a Deaf Fundamentalist Mormon Kid and His Journey to the NBA by Lance Allred

Book Description
Lance Allred was probably the last person you'd expect to make it in professional sports. Not only did he grow up on a polygamist commune in Montana, he struggles with obsessive-compulsive disorder. If those hurdles to the NBA don't seem large enough, Lance is also deaf.
Self-deprecating, witty, and wholly original, Longshot is the unlikely story of an unlikely athlete, who despite these factors and a lot of setbacks along the way, finally realized his dream of playing in the NBA, becoming the first legally deaf player in the league.
Lance refused to let others' expectations hinder his dreams, and his refreshing sense of humor about his disability allowed him to face these setbacks without giving up. From his childhood on the commune where he was "Mormon royalty" (his grandfather was prophet Rulon Allred of the fundamentalist sect) to his first time picking up a basketball (eighth grade), to his clumsy efforts to build his skills while growing into his 6' 11" frame, Longshot is a riveting account of a young man finding his purpose and letting the love of the game drive him toward his ultimate goal.
Going inside the competitive world of collegiate basketball and the strange experience of playing professionally in Europe, with paychecks that never arrive and a knee injury Lance's team didn't want to cover, Longshot recounts the moment when Lance hit rock bottom. When he came back to the United States for surgery, Lance was prepared to let go of his basketball dreams and become a high school history teacher like his dad.
But luckily he had an agent who didn't want to see Lance's dream die, and who found him a deal with the Idaho Stampede, an NBA Development League team in Boise. Although it was paltry pay, it was the last resort. And Lance slowly began to be noticed.
Revealing the resilient heart of a young man who truly believes that it's not about failure or success but about being willing to try, Longshot is a Rudy story for a new generation, a tale of inspiration, dedication, and the power of a dream.

Welcome International Reading Association members. Below is my PowerPoint from my presentation at the conference. Note to the right side of this post you'll find a Deaf Character store where you can purchase the books that I discuss throughout the blog; my list of 100+ and Counting list of books currently with 194 contemporary publications; archives to view past posts; and a list of author interviews. Thanks for visiting! If a blog seems like something that is too overwhelming to follow and you would like to receive my free newsletter by email, please contact me at: yadeafcharacters @gmail.com YADC (Young Adult Deaf Characters) is a quarterly on-line newsletter.

As Special Interest Group for Deaf and Hard of Hearing Readers Chair Michele Gennaoui of the St. Francis de Sales School for the Deaf in NY emphasized, the International Reading Association is supportive of including Deaf issues but to do so the Special Interest Group needs members. You all know that I am a huge advocate for professional organizations. This is how we keep our collective voice in the forefront of research and the advancement for our Deaf Students. Members of this SIG investigate new and innovative reading methods, examine current research and technology, and provide a discussion forum for teachers of the deaf and hard of hearing. The regular individual membership is only $39.00 which includes the bimonthly newspaper Reading Today. You can now join the SIG without any annual dues! IRA also provides Sign Language Interpreters for all of the hundreds of sessions at the convention. When you register for the convention, simply make the request while you are selecting the presentations you would like to attend. It is that simple. I strongly encourage you to join!
Posted by Sharon Pajka,Ph.D. at 7:35 AM No comments: