Interview with Flying to the Light author Elyse Salpeter 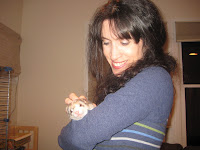 ES: I actually have written two chapters of a sequel to FLYING TO THE LIGHT. It takes place when Danny is now thirteen years old. It’s in the beginning stages right now, so I’m not even sure if THAT will change, but so far so good. (no pressure, folks!)
SP: Anything you'd like to add?

ES: I have this wonderful little ferret named Whiskers, who is deaf. We didn’t know the first few days we had her, but one morning my twins, who were seven years old at the time, were screaming at each other, right next to the cage. Our little ferret slept through the entire thing. When she woke up, we tried a lot of different things, crumpled paper, turned on the vacuum, squeaked toys and soon realized she couldn’t hear at all. Now we knew why she was so nippy, why she didn’t respond to us, why she was startled at times when we would walk up behind her.
We started our research immediately on how to communicate with her, reading a bunch of sites on how to train deaf ferrets. We began to use some very basic signs for her. If we wanted her to use the litter box, we’d get down to her level and point at it. Then put her in the litter box. She’d come out and we’d repeat it. If she nipped, we held her away from us, her watching us and would put up our finger and shake our head no, with a firm face. We did this over and over and in a few days, she learned that a stern face with a pointed up finger meant don’t nip and if we pointed to the litter box, she’d go in! We try to be respectful of her and not sneak up behind her… in fact, we’ll stomp on the floor a bit, or clap our hands if she’s walking around, just so she knows we’re coming up behind her so she won’t get startled. 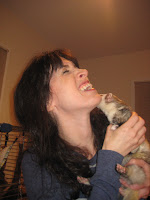