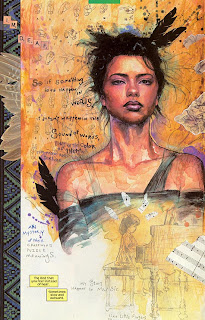 I will be the first to admit that I am not an expert…. And I don’t try to play one on this blog. I know very little about comic books and graphic novels… whenever I write about them I have to look up the vocabulary terms to describe the little speech bubbles and panels. Yet, I do know what makes my students happy and what makes me excited about teaching.

When I first began researching the topic of Deaf Characters in Comics and Graphic Novels, I hadn’t picked up a comic book since I was in high school… in those days I was reading Neil Gaiman’s The Sandman comics as they were published. I also loved the illustrations of Anne Rice’s Vampire Chronicles and some of the early comic book illustrations of Edgar Allan Poe stories. In fact, I still own all of those original comics and they have never made their way into my classroom. Why? Well, I guess I was afraid that they would get ruined or not be appreciated… and frankly there are so many memories and emotions tied up in those books. From where I’m typing, I can look over to my overstuffed bookshelves and spy them in the corner.

With all that love and passion, why did I not think about simply buying copies of these collections and putting them in my classroom? My students were the ones who urged me, after a decade of neglect, to examine comics with older, more experienced eyes…. And oh, yeah, if I could find some cool Deaf Characters along the way that would be great too. I tried but as much as I tried I didn’t find many cool Deaf Characters…. I found only one whom I liked and felt comfortable recommending. That character’s name is Maya Lopez, (also known as) Echo.
I originally liked Echo because she broke away from prior researchers’ typecasts of Deaf Characters in literature. She wasn’t a white male who was a victim of her deafness. She wasn’t isolated because she was unable to communicate with her peers. Echo is strong and confident... but that doesn’t mean she is without flaws—probably the reason I like her so much now. The character goes through various levels of growth.
If you’ve glanced through this blog you know that I adore this character who first debuted as a love interest for Matt Murdock in Daredevil in the late 1990s. A man of many talents (artist, writer, illustrator, etc.) named David Mack created her and the incredible storyline about her

life as a multilingual, biracial, strong-willed woman. I could go on and on about the multi-media artwork and how incredible the inclusions of both American Sign Language and Native American’s Indian Sign Language (Wow, David Mack did his research) added to the depth of the character but I’ll save that for academic publications and let you enjoy my recent interview with David Mack (pictured below). 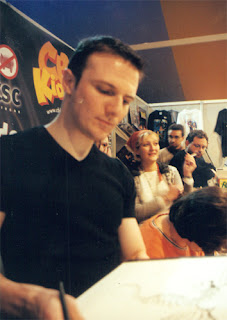 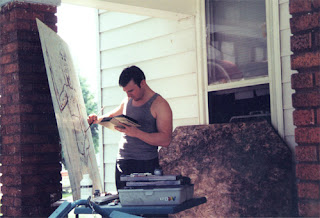 DM: I began working for Marvel as a writer, writing the Daredevil series right after director Kevin Smith. One of the things that the editor (and artist of the Daredevil series) Joe Quesada asked me to do was create a brand new character in this Daredevil story. The Daredevil character is blind and deciphers his world in a unique way. I thought he would have a unique connection with a character that also views their world through her own unique perspective. In a way different from Daredevil’s but in a way that was somewhat complimentary.
Daredevil deciphers much of his world from sound instead of sight. Echo grew up not having access or understanding of this “audible world” and therefore learned to decipher all of the visual cues of the world as a language that she pieced together by an acute pattern recognition. As a child, she began to realize the rhythms of body language, and facial expression and lip movement, and eventually began to see all movement as a kind of language. I began with these characters, their unique histories and childhoods, and motivations, and let them interact with each other.
SPW: What kind of research did you do in preparation to write from the perspective of an empowered Deaf, Latina Native American female?
DM: I read various autobiographies and biographies of people who had grown up deaf from childhood. This opened up an entire new world to me. I was fascinated to see things from that perspective and that influenced many of the details of the story.
I remember an autobiography where a boy was stunned to learn that rain made a noise. So if that visual element had a corresponding noise, he wondered what sound snow made. Or what sound a rainbow would make.
For the Echo- Vision Quest story, I also researched quite a bit on Indian sign language which fit into the language and symbology of the story. Much of this story was inspired my an uncle of mine who is Native American and had me draw Native American stories and symbology that he told me as a kid.
Much of the story was about the power of story telling, and storytellers as the shamans or cultural guides of our world. I also read autobiographies of Native American storytellers and artists, including those in which the storytellers describe themselves as shamans or medicine men that pass on their medicine through their stories. And I felt like the Echo story was a continuation of that.
SPW: Could you explain how you collaborated with the artists on your Daredevil issues? Did you give the artist a layout of what you wanted since some of your writing was immersed in the art itself? (I'm explicitly interested in the art which includes Indian Sign Language and American Sign Language)
DM: For the first Daredevil story, Marvel Editor In Chief, Joe Quesada was the artist. I gave him layouts to go with my script. This was just to make the script more clear to him as some of it was designed in an unconventional way. And I was writing specifically with his artistic talents in mind. Joe took the best parts of my layouts and fused that with his own dynamic approach to the art. For the story with the Indian Sign Language, and American Sign Language, I did the art to that series myself. So I went through a series of sketches and layouts to get it just right. And then worked bigger from that.
SPW: How did the character get picked up by The New Avengers? (sorry if this is clearly a novice reader's type of question…I guess I'm asking more about who "controls" the character—do you now collaborate on Maya's plot or are you disconnected from the character?)
DM: Brian Michael Bendis writes The New Avengers and he chose her as a character for his series. He was kind enough to mention this idea to me ahead of time to see what I thought about it, but he did not have to. And I thoroughly enjoy his writing and his additions to the life of the character. While I created the character of Echo, Marvel owns the character. They have been kind enough to let me establish the character a bit and flesh out her history, but it is a joy to give something back to the Marvel Universe. I’ve written other Marvel characters that talented writers created long ago, and it is nice to feel like I have contributed back to Marvel with characters that now have a life of their own.
SPW: What are you future plans for Maya/Echo?
DM: I certainly do have some! Marvel has suggested I write a future Echo series, so that would be fun, and the story builds on her talent at pattern recognition, in the form of her basically being a walking Rosetta stone of language. And there is something else cooking with her that I am involved in but I have to wait and let Marvel announce that!
[SPW Note to Readers: Here’s what I think he is talking about… in an August 24 interview with ComicBookResources.com (http://www.comicbookresources.com/news/newsitem.cgi?id=11698) he mentioned that several of Daredevil’s girlfriends will be making appearances in Daredevil: End of Days…. Echo is a pretty popular character so it is likely she’ll show up… but this is just my prediction:)]
SPW: What advice would you give to young people who are reading your books for the first time today?
DM: My main advice for students who want to pursue their own creative endeavors- writing, 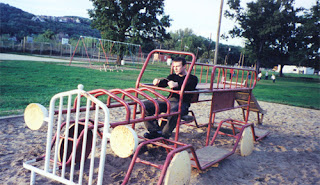 art, music, etc., is to just do it. You start it and keep doing it and figure out the details of what you want from it only from the sheer act of doing it on a regular basis. And then you find ways to make it grow and find a delivery system for it. My current Kabuki series from Marvel: KABUKI-The Alchemy is all about this. The story is basically a blueprint for turning your dreams and ideas into reality. But not in an abstract way. In a concrete, step by step practical way, that is applicable for just about anything. The story includes principals that I have developed in my professional work in the last 15 years, and illustrates those principles in very practical and hands on ways of immediately turning your 2D ideas into 3D reality. The #1 rule is to start it now, and do exactly what you want to do. Everything else grows organically through the practice of that.
******************************************************************************
Thanks David Mack! It is always exciting to meet someone who loves his job as much as I love mine. How refreshing to know that we don't have to grow up!
Be sure to visit David Mack’s website http://davidmackguide.com/ for more information about appearances, his artwork etc. There is even an interesting DVD The Alchemy of Art: David Mack…. Viewers can watch a trailer that includes various art pieces and an interview [sorry the trailer is not closed-captioned]. 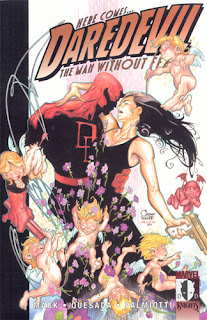 Don’t forget! Pick up Marvel Comics' Daredevil: Parts of a Hole (Reprints DAREDEVIL (Vol. 2) #9-15), Daredevil issues #51, 52, 53, 54, 55 for your bookshelves or classroom... and for younger children or adults who have never quite grown up (and that is perfectly OKAY!), check out Mack's latest book The Shy Creatures. 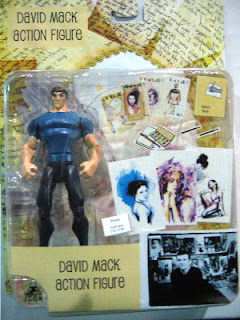