In my research on deaf characters in adolescent literature, I 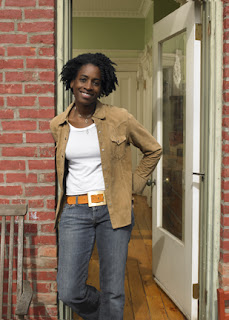 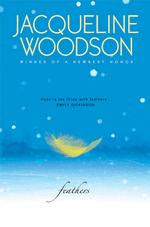 When my research was being conducted, Jacqueline Woodson's ((pictured above)) book had not yet been published. Her Deaf character Sean in the book Feathers is attractive, funny, and intelligent. Aside from that, Sean is the FIRST African-American Deaf character that I’ve found in young adult literature.

Author Jacqueline Woodson has received numerous awards including the Caldecott Medal, the Coretta Scott King Book Award, and the Newbery Medal for her children and young adult books. She wrote Feathers to demonstrate the various ways people find ‘Hope’ in the world. Set in January 1971, main character, Frannie latches on to an Emily Dickinson poem and writes “Hope is the thing with feathers” on her notebook. She ignores her mother’s attempts to explain the poem’s deeper meaning until her brother (and Deaf character) Sean calls her a fool (ahh, aren’t all brothers alike) and explains the meaning of ‘metaphors’.

Frannie’s world is separated by a highway. This becomes apparent when a new student, “Jesus Boy” arrives at her school. Frannie’s classmates tell the boy that he doesn’t belong on their side of the highway and that he needs to go to the white side… but “Jesus Boy” says that he isn’t white?!?! When her classmates bully him and mock sign language (since the new boy has yet to respond), the “Jesus Boy” actually uses sign language to say “No, I’m not deaf” (p.14) ?!?!

Sean has a major role in the book. His little sister looks up to him more than anyone. Sean uses sign language to communicate and attends The Daffodil School with other Black Deaf students (presumably since the school is located on “their” side of the highway). His entire family has learned sign language to communicate with him, including his grandmother with whom he shares a “secret language”. Frannie started using sign language even before she was two years old. Sean is responsible for not only "baby-sitting" his sister but for putting on a strong front when some hearing girls decide that his good looks are wasted on a deaf guy.

Many of my students really enjoyed reading this book since it includes characters with whom they can relate (always my goal!). At this point, I am planning to make this a “required” read and add the book to my curriculum.... that is how much I liked it. 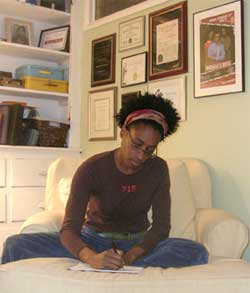 SPW: How did you get involved with writing a book about a deaf character who uses sign language?

JW: When I first starting writing for young people, (15 years ago) I knew I wanted to write books that spoke to the people who have historically existed outside of the 'mainstream'. I had grown up in a community that was predominantly black and Latino, that was working-class and working-class poor, that had hearing and deaf people in it, gay and straight people, and many variations of family. What I remember about the deaf people I knew was that no one signed and often they weren't in school. When I started reading (as a child) I was often surprised to find the world I knew didn't exist in literature and as and adult, wanted to put that world on the page. Once I grew up and met a larger Deaf community, I began to see the variations in this community were just as they were in other communities - variations in language, ways of living, levels of education, etc. FEATHERS is not simply 'about a deaf character' -- it's about a lot of people and how each world impacts on the other. Sean's non-hearing world is as important as Frannie's hearing one -- and that they can be in the same family but walk through the world differently is part of what the book is trying to say -- which is what many of my books try to say -- that we all have a right to walk through this world in a way that is safest for us.

SPW: Will you talk about your experience meeting and working with Deaf people prior to writing this book?

JW: I studied ASL at the NY Society for the Deaf for many years and moved in a community that had hard of hearing, deaf and hearing people in it. Many of my friends are interpreters and although I did not want to be an interpreter, I wanted to speak to Deaf children as I spoke to hearing ones -- I wanted to be able to visit schools that were for the Deaf or walk into a classroom where there were deaf kids and be able to communicate with them without an interpreter. Over the years, I've found that this makes SUCH a difference for the young person -- to see that a person cared enough to learn their language. I know a good bit of sign language still -- although I wish my receptive skills were better. I speak Spanish as well. I think there is a lot of ignorance around/about what it means to be Deaf -- but I think the hardest thing for me is the invisibility factor -- and I don't want people to not see each other. Putting Sean on the page is a way of beginning -- yet again, the dialogue between the hearing and the deaf community.

SPW: What kind of research did you do in order to make the character Sean appear like a real deaf teen?

SPW: What one thing do you hope young readers take away from "Feathers" and all of its characters?

JW: My hope is the same hope I have for all decent literature, that the reader walks away thinking about a bigger world and a greater good.