Marlee Matlin may join the cast of Dancing with the Stars

Deaf Character author and Academy Award Winner, Marlee Matlin may be adding ballroom dancer to her list of accomplishments .

Rumor has it that Matlin could be joining the cast of Dancing with the Stars. Of course, we won't find out for sure until the end of the month when ABC announces the Season 6 cast. 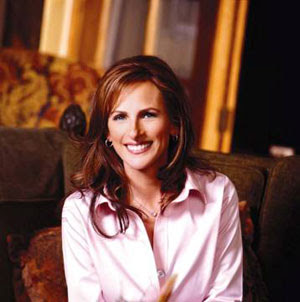 "Choosing the deaf actress would be a continuation of Dancing's quest to defy casting expectations and prejudices", Hollywood Insider.
ABC declined to comment on the casting, although a spokesperson said, "there are a lot of rumors floating around out there right now." According to one knowledgeable source, the network even requires all cast members to sign confidentiality agreements.
Okay Jodi, can you top that? I can so see ballroom dancing in your future:)
Posted by Sharon Pajka,Ph.D. at 12:25 PM

Thanks for letting us know about the possibility of MM being on the DTS show.

Oh God,
Sharon, I had to erase the comment I was about to leave, because this is just not the place. I will let you in on a little secret that I was a ballerina a long, long time ago! Ballroom dancing...just not my style! Love, love, love you, Jodi
PS. That would be incredible if MM was on Dancing with the Stars! In Italy, there have been a couple of American stars and guest appearances on our version - Ridge and Naomi Campbell rocked it out on two different occasions.

Can I dance with MM?

Jodi, keep it clean:) This blog is PG-13 but you're welcome to send the NC-17 comments by email:)((I'll be honest that I sometimes blush reading your posts hee hee)) Just thought I could encourage a little competition between the Deaf Character authors.

Anonymous,I can't even land an interview with her. If you get a chance to dance with her, will you ask her to email me:)I want to ask some questions about her books. Thanks

Update via Yahoo this morning: Marlee Matlin will indeed be a dancer on Dancing with the Stars. That should be interesting.