Myron Uhlberg has a self-deprecating nature 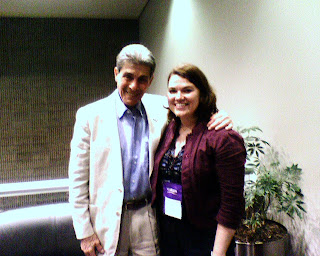 that is both humbling and humorous. During his presentation, I laughed, got teary-eyed, and felt nostalgic as I watched the 75-year-old CODA discuss his life and the legacy of his parents, Sarah and Lou Uhlberg. It was an absolute honor to attend his presentation and to meet with him afterwards.
Myron was born in 1933 to parents who “just happened to be deaf.” Myron never thought of his parents as “disabled” or “handicap” but recalls how they were discriminated against. In one instance, as a 6-year-old CODA, Myron 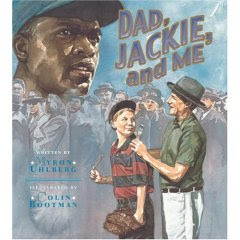 recalls the insensitive remarks one man made to his father. On the street, a man tried to gain Myron’s father’s attention. When the man perceived Lou as ignoring him, he approached him in anger. Lou immediately signed to Myron to interpret what was being said. Myron explains that the man’s face turned from ignorance to shock and then to disgust as he uttered, “You Dummy!” and stormed off. In his book Dad, Jackie and Me, Myron explains that he began to understand the connection between Jackie Robinson who endured numerous racial taunts and his own Deaf father who experienced a similar type of prejudice throughout his life.
Myron always saw his father as a hero and shared this perspective through his book, The 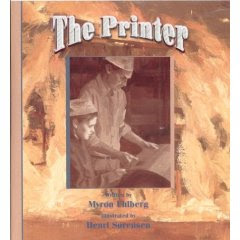 Printer, the story of a deaf printer who saves his co-workers with the help of sign language during an emergency at the newspaper printing plant. Myron bubbled up with pride explaining that during the Great Depression, his father held a Union job. Myron’s household, despite his father’s income, was the first family on their block to buy a television.

When Myron’s parents were married, he explains that Deaf people were discouraged from having children. This was true for his parents; however, as Myron says about the will of Deaf people in his parents’ generation, they knew their hearing parents were ignorant and regardless of what was said, they had children anyway. To show they were good parents, Myron always had the best clothes to begin the school year. Myron explains that his parents didn’t have much money but Lou and Sarah’s children would always get the best clothes and the newest shoes. His dad wasn’t cheap; he liked quality.
Although he is an author of picture books (and an upcoming memoir), his books are for both young people and adults. He published his first children’s book at 66-years-old. He remembers an educator saying that there are no deaf heroes in children’s literature and he wanted his father to be that hero.
Although Myron writes about his father in The Printer and Dad, Jackie and Me, it is his mother who appears in his book Flying over Brooklyn, about the snow fall in 1947. The snow is a metaphor for silence. In his book, “All sound was muffled.” The main character who flies over Brooklyn can not hear a thing and must rely on his other senses. 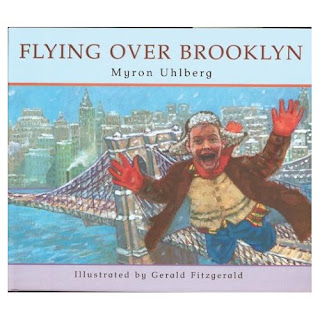 Although I have received numerous requests in the past to broaden my blog to children’s literature, I have remained stubborn and insistent that this blog (especially my 100+ and counting list) is a place for adolescent literature. That being said, Myron Uhlberg, his picture books, and his stories about his parents have absolutely stolen my heart. This summer I will be expanding my blog to include both picture books and children’s literature. We can also look forward to Myron’s upcoming memoir, The Sound of All Things.

The International Reading Association (IRA) Convention was huge! I was able to see Walter Dean Myers and Jerri Spinelli in a single day and aside from Myron Uhlberg’s presentation, there were two other presentations that focused on Deaf and Hard of Hearing Readers including: Susan Fullerton’s Self-Correction and Early Literacy Processes: A Comparison of Deaf and Hearing Readers; and, Barbara Schirmer and Laura Shaffer’s Research Poster Session, Strategies for Teaching English Language and Struggling Learners Guided Reading Approach: Application to Deaf Students.

The IRA is supportive of including Deaf issues but to do so the Special Interest Group needs members. You all know that I am a huge advocate for professional organizations. This is 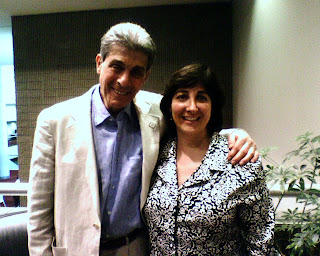 how we keep our collective voice in the forefront of research and the advancement for our Deaf Students. Members of this SIG investigate new and innovative reading methods, examine current research and technology, and provide a discussion forum for teachers of the deaf and hard of hearing. Michele Gennaoui (picture right with Myron) of the St. Francis de Sales School for the Deaf in NY is the contact person for this SIG. The regular individual membership is only $36.00 which includes the bimonthly newspaper Reading Today. You can now join the SIG without any annual dues! IRA also provides Sign Language Interpreters for all of the hundreds of sessions at the convention. When you register for the convention, simply make the request while you are selecting the presentations you would like to attend. It is that simple. I strongly encourage you to join!
Posted by Sharon Pajka,Ph.D. at 11:19 AM

I would sure like to know how to talk to Myron Uhlberg like it looks like you have. My adult son is Deaf and so is his 9 year old daughter. I just read Myron's book. It was fantastic. If you know how to reach him, could you let me know?