Interview with D.S. Elstad, author of The Forest of Aisling 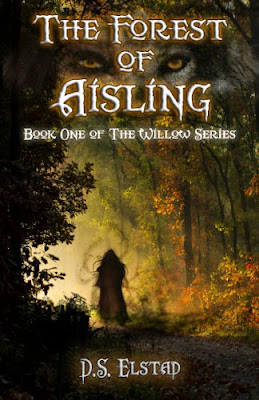 Willow Whelan began having mysterious dreams about a month before the story begins. Her mother, born on a reservation and part of the Lakota tribe of North Dakota, explains Ihan’bla, a ritual or vision quest that some Lakota have in the form of dreams.

Of course, two months earlier Willow began attending a new school, The Santa Fe Fine Arts Academy, so there is a great deal going on in her life. All of this is seemingly put on hold when Willow travels to Ireland with her father to the funeral of the paternal grandmother she has never met. However, the dreams continue. Willow discovers forest of my aisling, “an Irish word meaning vision or dream” written in faded handwriting on family papers; she begins to realize that this isn't a likely coincidence.

Willow meets her second cousins Quinn and Kelleigh and their friend, “the tall boy” Bram (Deaf Character) who readers later learn “lost his hearing when he was eleven after having meningitis”. He is also named after one of my favorite writers. Bram, who is fluent in Irish Sign Language, often communicates with Willow as most teens do through text message, writing, and even speech. A few of the other characters are also fluent in sign language but I don’t want to give away any surprises. I think readers will really enjoy this character. Bram is part of the adventure; the story isn’t about his deafness.

There are apparitions, shape-shifting, Celtic mythology, what the characters in Buffy the Vampire Slayer would call “The Big Bad”, secret pendants, atypical inclement weather and a bit of teen romance. All of these issues swirl around Willow as she and her family must uncover the mysteries of her grandmother’s death and why exactly the body doesn’t appear to be decomposing as it should.

This was a book I thoroughly enjoyed reading. To write that there were surprises would be an understatement. I couldn’t want to discuss some of the topics with the author.

SP: What inspired you to include a deaf character that uses sign language? (especially Irish Sign Language which I have to admit I don't know anything about!)
DSE: The inspiration for Bram came from my experiences with my husband and his family.  My husband is hearing but grew up with deaf parents and a deaf brother and always felt like sign language was his first language.  When we met I had very limited contact with the deaf.  Right away I was welcomed into his family and encouraged to learn sign (which I’m still trying to master after many years!)  My husband and his mother were both teachers and were very passionate about bridging the communication gap between the deaf and hearing.  Their passion for the language and the beauty of the language itself impressed me so much that when I sat down to write The Forest of Aisling I knew I had to include a deaf character.  Since the story takes place in Ireland that led me to do research on sign language of that country.

SP: What research did you do to make your character and your deaf characters interaction with non-signing characters believable?
DSE: Research for interaction between the hearing characters and Bram was pretty easy.  My husband is involved in the deaf community and many times I’d go with him to different functions.  It always impressed me how many Deaf people would be willing to teach me sign and how patient they would be with my attempts at it.  When signing wasn’t working a pen and paper would do the trick.    Real-life attempts at communication were transferred to Bram because of those experiences.

SP: Without giving away any of the plot (this will be tricky), can you discuss Bram's special abilities?
DSE: Bram finds out mid-way through the book about a special ability he has inherited.  I wanted this to be more about who he becomes and less about who he is.  The ability Bram discovers about himself is something ancient and is only used during certain times.  I wanted to stay away from giving Bram an ability that compensated for his deafness and instead have his ability tie in directly to what he’s destined for.  It was important for me to get the point across that Bram not only accepts his deafness, he chooses to learn sign language and steers away from a cochlear implant because he believes being deaf is as much a part of who he is than any other quality he possesses.

SP: What do you hope that readers will take away or learn from The Forest of Aisling?
DSE: I hope readers will feel uplifted and entertained.  I hope they’ll be able to relate to the characters in the book and realize that no matter how different we may seem we are all very similar.  We have the same hopes and dreams and desires.

SP: What advice do you have for young readers?
DSE: The best advice I’ve ever received and I’m sure many young readers have already heard is to read, read, read.  There’s so much great literature out there that everyone should be able to find a book/books that interest and inspire them.  Then after you’ve read a lot go ahead and write your own story.  We all have a story to tell and the world needs to read yours!

SP: Anything you'd like to add... such as maybe a bit about sequels?
DSE: There are three books in The Willow Series.  The first one, The Forest of Aisling, dealt with Willow’s Irish heritage and explored Irish Mythology.  Book Two, The White Cliffs of Owanka, follows Willow back home to New Mexico where she learns more about her Native American roots and the Legend of the Skinwalker.  The third sequel will bring the key characters together again for a final confrontation with sinister powers.   Book Three will also delve more deeply into deaf culture through Bram and a journey he must take.