Joy, a new deaf student at school who uses sign language and 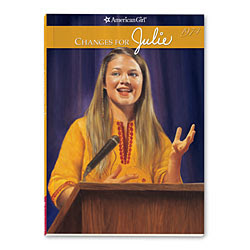 lipreading to communicate, has trouble understanding what her teacher is saying when the teacher writes on the board. Julie understands what it is like to be new so she writes her new friend a note to Joy to tell her what was said. Unfortunately, there is a no note-passing rule in the classroom and Julie is sent to detention where she has to write ridiculous sentences over and over again. Determined to change the rules for detention and the system itself, Julie decides to run for student body president. Her choice for vice president is Joy. The two girls face several challenges. For starters, they are fifth-graders and the class president has always been a sixth grader; they are running against the most popular guy in school; and Joy isn't so popular. In fact, some of the girls in her grade say that "she sounds so weird when she talks" (p.28) and that her speech "sounds like she's inside a fishbowl" (p. 45). Will Julie compromise her principles? Will she win the election? Will sign language save the day? You've got to read the book to find out! 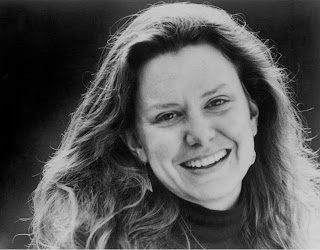 Megan McDonald is the author of numerous children's and young adult books, including the popular Judy Moody series. From her website, you will learn that she has two dogs, two horses, and fifteen wild turkeys; she begins writing her books on napkins; and, when she was a child, she collected bugs, toothpicks, scabs and Barbie doll heads. Now that she is an adult, she lives with her husband in California. She has a B.A. in English and a Masters in Library Science. Despite her busy schedule and book tour in Los Angeles, Chicago and New York, I was able to interview Megan McDonald about her recent book, Changes for Julie. Check out the interview below.
************************************************************************
SPW: How did you decide to include a deaf character who uses sign language? What kind of research did you do in order to make the character Joy appear like a real deaf adolescent and be historically accurate in the content?

MM: When I was growing up in the 1970s, my mother, a social worker, worked with kids with disabilities, some of whom were deaf. She was a great advocate for these children, and believed strongly in raising awareness about such disabilities. As a result, I grew up learning to have empathy, treat people with disabilities kindly and fairly, and not be afraid of kids who were "different" from me. In retrospect, disability rights was an important issue in the 1970s, and I felt strongly that this should become a theme of one of the Julie books. Research helped me to set Joy's deafness in historical context, and I did consult sign language manuals to help me with signs I could not remember from experience.

SPW: In the book, you describe some of signs that Joy and Julie use in sign language in great detail. How were you able to describe such signs? Did you take a sign language class, consult with someone, or learn from a book?

MM: From the time I was in high school, I tried to learn some sign language so I could hold conversations and sing songs etc with the kids my mom worked with. When I got to college, I took some classes in sign language. I went on to work in public libraries, where I often had the opportunity as a librarian to tell stories in sign for deaf children. And I had a friend who was deaf who worked at the library---even though she signed REALLY fast, she was very patient with me and my finger spelling, and we'd often laugh over funny mistakes I made when signing. When I was finished with the manuscript, a consultant did read and give feedback with an eye toward accuracy.

SPW: Has Joy appeared in any of the other American Girl books? Do you have plans for her character or any other deaf characters in future books?

MM: Since the character of Joy Jenner was not introduced until Book 6, she doesn't appear in any of the other Julie books preceding this one. I don't have any specific plans for another deaf character, but I find signing such a beautiful and appealing language, that you never know. Maybe Judy Moody will learn sign language one of these days.

SPW: What do you hope young readers will gain from Changes for Julie and its characters?

MM: I tried to realistically portray reactions to Joy. In other words, I did not shy away from showing that kids can be hurtful and unkind to someone with a disability such as deafness. My hope is that reading about such a character raises awareness and humanizes them so that kids don't have to be afraid of such differences. As in the story, once kids get beyond the "disability" and see the real person, true friendship can result.

Megan is the BEST!