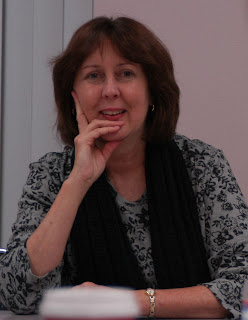 Author Penny Warner has published over 50 books for adults and children, both fiction and non-fiction. She has a series that features main Deaf character, Connor Westphal, a journalist in the small town known as Flat Skunk (California Gold Country). Connor is one cool character who publishes her own newspaper, drives a 57 Chevy, and lives in a diner. Hey, who doesn’t dream of endless grilled cheese sandwiches?

The CONNOR WESTPHAL MYSTERY SERIES includes Dead Body Language (which was nominated for an Agatha Award and won a Macavity Award for Best First Mystery), Sign of Foul Play, Right to Remain Silent, A Quiet Undertaking, Blind Side, and Silence is Golden. 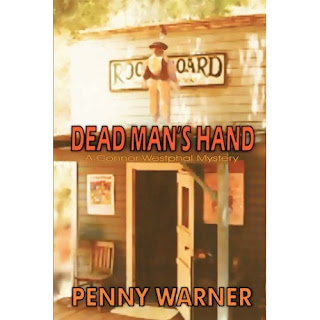 Book Description:
In DEAD MAN'S HAND, Connor is on an emotional roller coaster, with hearing love interest Dan Smith and deaf advocate Josh Littlefield controlling the gears. Dan has proposed, and while she loves Dan, she isn't sure she wants to be married, since her parents divorced as a result of her deafness. Besides the fact that hearing and deaf people come from two worlds, marriage implies dependence to Connor, the one thing she's been fighting against her whole life. Josh, recently widowed and actively pursuing Connor, is single-parenting his young deaf daughter, whom Connor adores. But Josh has also grown more radical over the years, and has plans to establish a nearly self-sufficient Deaf Community at a nearby ghost town. As the town becomes divided on several issues Connor senses an undercurrent of malevolence. The casino controversy is keeping Connor too busy to examine her real feelings, but her sense proves portentous. The infamous and historic landmark, the Hanging Dummy-an image of a prospector carved from wood-swings from a rope over a Flat Skunk gold-mining shop, in effigy for all the poor hanged souls of the mining years. But it's suddenly lost an ear. Connor's roller-coaster is about to pick up speed with a whole new set of distractions-the appendage turns out to be human.

SPW: What inspired your character Connor Westphal and her mystery series?

PW: I have a Master's degree in Special Ed/Deaf and worked with deaf infants and preschool children, as well future teachers of deaf education, and sign language. I wanted to write a mystery with an interesting character, and thought - why not have a deaf protagonist solve the mysteries? I figured she could do anything but overhear whispered conversations...

SPW: What type of research do you do to gain perspectives on the various Deaf Characters that you include in your series?

PW: Although I know many deaf people, I wanted to make sure my representation of a deaf person was accurate. No two deaf people are alike, of course, but they may share some similarities that I thought would be interesting to readers, and even aid in their detecting skills.

SPW: Will you talk about your experience working with/ teaching deaf individuals?

PW: I do have a lot of deaf fans that I hear from via email. But the most exciting thing has been working with Andrea Ferrell, the actress on 7th Heaven who plays Heather. She wants to turn the books into a TV movie or series - and I think she'd be the perfect Connor Westphal. I've also met with Marlee Matlin about the books.

SPW: How did you decide to become a writer? Will you describe your experience with publishing your first book?

PW: My first books were non-fiction -- children's activity and parenting books -- but I wanted to write a mystery because I loved reading them. I tried a couple of characters but they didn't click until Connor came along - she was just more interesting. My first agent didn't like the idea of a deaf character -- not "mainstream" enough - so I fired her and found an agent -- and editor -- who loved her.
SPW: Can you give us a sneak peek in the next Connor adventure?

PW: Truthfully, not sure yet, but there's plenty to tackle. I like to include an aspect of deafness along with a good mystery.

SPW: What advice would you give to young adults who are reading your books for the first time?

PW: Don't give up. And stick with what you believe in, even if others may not agree. If you like it, and think it's good and interesting, then someone else will too.

For more information about the author, visit: http://www.pennywarner.com/
Posted by Sharon Pajka,Ph.D. at 12:14 AM