This seasons seems to be filled with MAGIC... with the release of 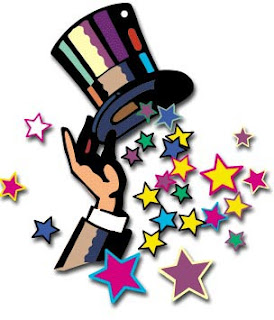 , by J.K. Rowling's will be released on July 21 (but you probably already know that, right?); the release of the latest Harry Potter movie and the television show starring magician/illustionist Criss Angel (you know the one who went on a date with Cameron Diaz). With all the advertisements, you just can't miss the Magic!
Today, I thought I would include some information that if you're interested in magic, you might not want to miss....
12th World Deaf Magicians Festival in Riverside,California
April 6-13, 2008 (Registration Due January 31, 2008)
Junior Magicians (Ages 7-17)
http://www.2008wdmf.com/
registration: http://www.2008wdmf.com/juniortype.pdf

While you're waiting for this festival, check out this book:
A Dynasty of Magic by Doreen E Woodford & Mary Plackett
Publisher: BDHS Publications
This book includes a biographical history of two Deaf magicians (father and son) who entertained Deaf and hearing people alike for over 75 years.
To order: http://www.deafbooks.com/deaf-history.htm
Happy Reading!
Posted by Sharon Pajka,Ph.D. at 8:26 AM