Interview with Steve Kluger, author of My Most Excellent Year

My Most Excellent Year: A Novel of Love, Mary Poppins, and Fenway Park
by Steve Kluger 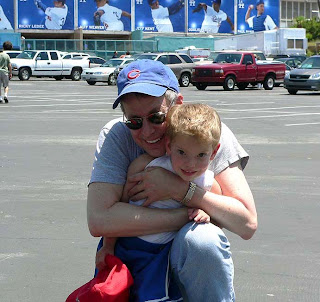 Reading level: Young Adult
Hardcover: 416 pages
Publisher: Dial (March 13, 2008)
ISBN-10: 0803732279
First mentioned on this blog December 5th
***************************
My Most Excellent Year is an epistolary tale (letters, emails, instant messages, journal entries and English writing assignments) of three high school students who are writing about their "Most Excellent Year". The three main characters include: Anthony/T.C./Tick who attempts to win the heart of Alejandra; Alejandra, the strong-willed young woman who tries to balance being a diplomat's daughter while sharing a love for the stage with Augie; and, Augie, the "adopted" brother of Tick who struggles with coming out of the closet for mere moments only to realize that his friends and family are already aware that he is gay...better yet, they are all okay with it.
((Pictured Above Right: author Steve Kluger with his nephew Noah "who--outside of the fact that he isn't deaf--was the prototype for Hucky, right down to his mad face and a stuffed dog named Shut-the-Door"))
While Kluger includes three main characters, a strong secondary character named Hucky is introduced early on and then his storyline resonates throughout the entire text. Hucky is a six-year old orphan and the deaf character in the book. He mostly uses sign language and a little bit of lipreading to communicate, aside from gestures and various "faces" to convey messages. Anthony/T.C./ Tick and Augie see a great deal of themselves in young Hucky. While they "grow up" together, the teens and Hucky all find ways to believe in magic.
I am thrilled to begin 2008 with such a great book recommendation. Although the book is not yet released, it will be out by Spring Break. Read my interview below with Steve Kluger. ************************************************************************
SPW: From your website, it seems that the characters share some similarities with your own life experience. I'm curious how you decided to include the deaf character Hucky in the book? Do you know any deaf people/children?
SK: Hucky Harper was a character I came up with many years ago, but for whom I could never find a home. I tried to place him in various story lines at various times, but nothing quite fit. His age ranged from 8 to 12, depending on which plot I was attempting to squeeze him into, but in all versions he was always deaf. It wasn’t a conscious choice--it just came with his personality. I don’t know any deaf people personally, though I’m good friends with several interpreters. However, when I was four years old and in nursery school, there was a boy in our class named Bruce. He was an auditory aphasic--words were heard by him as a jumble of sounds, and when he attempted to speak, what came out was similarly garbled and unintelligible. Given his difference from the others, he was something of an outsider--but he and I became best friends. I’d read picture books with him, point out the animals, and teach him how to say the words by having him watch my lips and then by forming his mouth into the right shapes. It’s something I’ve never forgotten, and that’s probably why Hucky Harper eventually surfaced as a character. I’m attaching a photo of our nursery school graduation. Bruce and I are standing next to each other in the center of the front row. I’m looking straight ahead, and he has his head turned toward me. 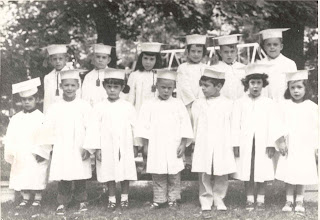 SPW: Hucky is a six-year-old deaf character who uses mostly sign language and a bit of lipreading to communicate (aside from his pouting gestures). Considering that the entire cast of characters had to figure out how to communicate with Hucky, will you explain your decision to have Hucky use sign language?
SK: I wanted to see these kids create their own version of the world for this little boy. This meant having them learn some sign language, experimenting with some lipreading, and discovering their own ways to share their favorite music with a boy who can’t hear. Regular rules didn’t appeal to them--they improvised their own special means of communicating with this kid by taking bits and pieces of the established alternatives and inventing their own language. In doing so, they brought him halfway into their world while traveling halfway into his.
SPW: What type of research did you do for the book?
SK: I attended an ASL course at a local college for a semester and got pretty fluent for awhile (although at a beginner level). That was all I really needed. The other elements in the novel were comprised of many of my favorite passions, so all of that information was already in my head.

SPW: What do you hope that readers will learn or take away from the book?
SK: To quote the last page: “Never, ever, ever stop believing in magic.” One of the throughlines in the story involves a “magical” experience with a purple balloon. This wasn’t made up--it happened between me and my nephew when he was 3-1/2, pretty much as I tell it in the book. My then-7-year-old niece wanted me to explain how it qualified as “magic,” and I told her that cartoon magic like turning pumpkins into coaches is just fairy tale stuff. Real magic comes from people’s hearts and makes impossible things happen. When you look at how Hucky’s most ardent dream is realized by novel’s end, you realize how virtually impossible it would be to pull off something like that in the world we live in--yet how simple it actually is when your heart’s making the plans.
When I was in fifth grade in Baltimore, I had a teacher who changed my life. Every one of the 36 kids in that class felt the same way--and he later said that we weren’t just the first class he’d ever taught, we wound up being the best (in a career that spanned 30 years). Many times as an adult, I’d often wished for one more chance to be sitting in my seat in that same classroom with the same kids, being taught the same lessons, and being led in the same songs we learned when we were eleven. As it happened, I’d gotten back in touch with my teacher when I was 28--and during a New Year's trip he made to California in 1990, I idly asked him how he’d feel about a 27th anniversary fifth grade reunion, back in Baltimore. Given that most of us kids hadn’t seen each other since 1963, he quite rightly thought I was nuts. However, within a month, the other 35--scattered all over the globe--had been tracked down (impossible!), had eagerly gotten on board for an early summer reunion (doubly impossible!), and eventually found themselves in our old seats in our old classroom, being taught the same lessons and being led in the same songs we'd learned when we were eleven (absolutely out-of-your-mind impossible!). We were 38. The odds that we’d all even still be alive were remote--let alone that 36 hearts would be in such harmonious synchronicity. I rest my case. Magic happens every day. 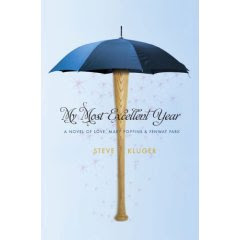