Interview with Paul Rowe, author of The Silent Time 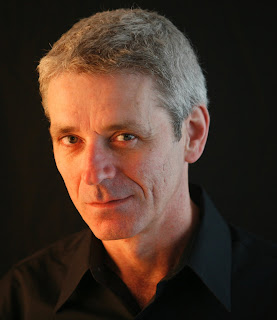 The Silent Time by Paul Rowe (September 2007)
Publisher: Killick Press
I'm been going on and on about this book for about a month now. See my December posts for a brief summary and links to articles about the author. I'm thrilled to have had the opportunity to discuss this book with the author. Based on his mother's experiences, The Silent Time has a strong sense of place in Newfoundland and a compelling plot that reads much like a play (not surprisingly since Rowe is both an actor and playwright). I was emotionally invested in each of the characters. With that being said, it is hard to believe that this is the author’s debut novel. Read my interview with Paul Rowe below.
******************************************************************************
SPW: In Memorial's Student Newspaper, I read an interview where you explained that you actually found letters about your mother's enrollment at the Halifax School for the Deaf. Can you explain how this developed into a novel?
PR: The letters are where it all began. They are dated in the early months of 1926 and formed the entire basis for my research. I had to track down who the signatories were, their social and political circumstances, and, in doing so, I encountered many of the stories, characters and events that form the novel.
SPW: You've included so many details about Newfoundland, the history of the education of Deaf people, and some personal histories of your mother and perhaps some teachers she had. I'm sure your mother had some input in your choices that you made about the book. Will you describe your research for the novel?
PR: My mother was helpful in describing her life at the School for the Deaf, and in the small coastal community where she grew up. I went to the Public Archives of Nova Scotia and found a number of pictures and old records that sparked memories for her. I would encourage her to reminisce about these things and got some nice detail that way. For example, she told me that she used home signs before she went to Halifax, (like a finger stroke down her forehead for the family horse) and she described an incident at school where a teacher had been unkind to her. It also found its way into the book. Since one of my main characters was a politician, it was important to get the politics of the era right, as well. That required quite a bit of reading. The other big element of research was, of course, Newfoundland stamps. All the stamp stories in the novel are based on actual, sometimes slightly altered, historical events. I recently did a talk on my book for the St. John’s Philatelic Society and I’m glad to say the accuracy of my research passed muster even among the experts.

SPW: I read that the cover of the novel has a black-and-white photograph of your mother while she attended the Halifax School for the Deaf. Were you able to give feedback or suggestions about the book cover?
PR: I collaborated to some degree with the designer, Sarah Hansen. I offered some feedback on draft versions, and provided the two images on the cover; the stamp and Mom’s picture. All the other design elements are Sarah’s. I think she did a really good job.

SPW: The novel revolves about the character Dulcie but the story isn't told fully from her point of view (which would be difficult considering the story began even before her birth). Can you explain your inspirations for some of the other characters such as Leona, Paddy, and William Cantwell. Were there real or historical figures who inspired you to include these characters?
PR: William Cantwell is roughly based on William Walsh, who was the Member of the House of Assembly for the district at that time and the signatory to one of the letters I mentioned earlier. Leona and Paddy are more fictional creations, although the tragic episode in Part One of the novel is largely derived from an old Cape Shore story about a couple who shared the same fate. Sir John Crawford, the Finance Minister, is roughly based on a historical figure who most people in Newfoundland recognize pretty readily.
SPW: You clearly researched the history of deaf people and deaf education; however, while you incorporated historical references such as the Braidwood Institute and the Abbé de L'Epeé, why did the teacher Claire Batstone (one of my favorite characters in the book) refer to "Gaudillet College in Boston" instead of the actual Gallaudet College in Washington, D.C.?
PR: To tell you the truth, I don’t know how that happened, but it will be corrected in the next printing. I’m really glad you liked Claire, by the way.

SPW: What advice would you give to young people who are reading your books for the first time?
PR: I would invite them to be willing to enter the world of a different place and time. Both my heroines, Leona and Dulcie are quite young when we first meet them. Young people might find it interesting to put themselves in my characters’ shoes, and think about their own possible reactions to the circumstances in the novel.
Among other things, this novel brings to light an issue of fundamental rights for deaf students, and for children everywhere who have the human right to an education. One of the reasons the novel is called The Silent Time is that Newfoundland’s deaf children were denied an education in the early 1930s, a time when no one was willing to speak up on their behalf. A number of children referred to in the novel never got the chance to return to school. My mother was one of those children, and I’m proud to have brought her story to light after all these years.
*****************************************************************************
Posted by Sharon Pajka,Ph.D. at 3:54 PM

Another book that I'll be adding to my "read this" pile. So many books, so little time!