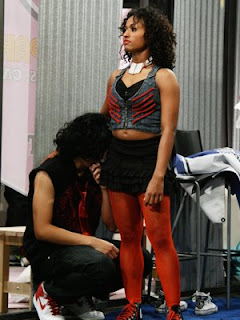 After five weeks of competition, the Detroit dance crew A.S.I.I.D. (And So It Is Done) didn't make it through to another week on the second season of America's Best Dance Crew.
I've been following the show since the first episode when we were introduced to A.S.I.I.D. crew member Joooey, who is profoundly deaf. Joooey lost his hearing aid a few weeks back during the crew's performance but it didn't slow down any of his moves last week in the speed competition. I thought A.S.I.I.D. was one of the more popular crews but if they don't get enough votes they're off the show. Last week, Joooey's energy impressed the judges and Lil Mama called Joooey "the hardest boy" in the group and complemented him for not using his deafness as any type of crutch. After all, there's no room for cry babies on this dance competition. I guess I'll have more time for reading now.
Posted by Sharon Pajka,Ph.D. at 1:48 PM