Interview with Anne Colledge, author of Falling into Fear

Anne Colledge was born in North Wales and educated in Cambridge. After thirty years in the field, she is a retired Deaf Education teacher. Her 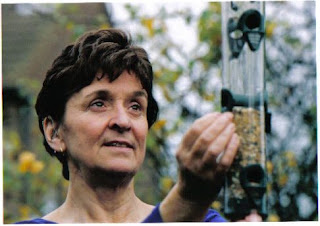 former students referred to her as “The Toy Lady” because her car was always filled with toys. Now, this Deaf author writes books for young people including the children’s book Northern Lights (2001). She is currently working on Playing Dead, a story about the First World War and her family.

Falling into Fear is the story of Catherine, a young deaf girl whose mother is seriously ill. Catherine and her brother Henry must leave their home for a while and stay with their grandparents. Oddly, Catherine slips back in time and experiences what live was like in the past. Gradually, she learns not to be frightened by these encounters even thought Catherine ends up in a war zone that is bombed, becomes a Roman slave and must protect a young child from wolves. These adventures help Catherine cope with her mother’s illness. Catherine isn’t the only Deaf character in the story. The story includes the Knowles family who are all deaf except the dog. James, the boy Catherine appears to have a crush on is fluent in sign language. The young characters also uses text messaging with their friends and a few of the characters wear hearing aids.

SPW: Will you describe how you develop your story ideas (particularly, the idea of time travel or falling into time)?

AC: I like to slip into another world for a time in my imagination and you can go anywhere for free! In North East England, where I live, there are 1,000 castles nearby. There are Roman Forts as well. In one there is a skeleton in the floor which gave me a fright, I felt as if I was being drawn into its eye sockets and falling, so that is why I called my book Falling into Fear because that is what happened to me.

When I was a child, sixty years ago, there was no television or computers. We just had the radio and books and we did have a lot of fun. The War was scary when we were bombed so I put that in the book as well. My father worked on the railways so we travelled a lot, often to the sea side, on the steam trains which rattled and hooted so we loved those journeys. It all goes into my books.

SPW: After being a teacher for thirty years, how did you transition into becoming an adolescent literature author?

AC: I enjoyed teaching deaf children very much and when I retired I missed the children so I joined a Canoe Club and when we were paddling on the rivers and the sea the children talked to me. Sometimes we laughed and sometimes they were worried, when their parents were divorced, or they had other problems. I began to put these into my books.

When I was teaching there were no books with characters who were deaf. I wanted deaf children to be the heroes so that is why I wrote the books.

I have always written but had more time when I left work to do what I always wanted to do.

SPW: Were your former deaf students your inspiration for your characters Catherine, James and the members of the Knowles family? Will you describe how you develop your characters?

AC: The characters are bits from my own grand children, deaf children I knew and people I have met.

SPW: What do you hope young readers will gain from your books and its deaf characters?

AC: I hope the children who are deaf will use the characters as role models. It was a bit sad in a school I was visiting when a girl who is deaf asked me, "Could a deaf person write a book?" We have to say, "Yes," and put the books in their hands for them to read.

Formerly deafness was rarely mentioned in literature or if it was it was usually older people who were deaf, and it seemed to be regarded as a big problem. We have got to redress this.

I hope hearing children will gain an insight about what it means to be deaf and how small changes in how they treat deaf people can make all the difference.

Thought you might like to see my blog as I have just linked to yours! http://holidaypropertyexpert.com/holidaylettings/joprice/books-and-dvds-keeping-it-local/
It mentions two of Anne Colledges books