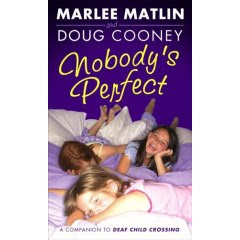 Today I finished reading Nobody's Perfect by Marlee Matlin and Doug Cooney, which is a companion to Marlee Matlin's Deaf Child Crossing. Main character Megan is back with her BFF (best friend forever) Cindy but this time there aren't any summer camps for friendship triangles. Megan is busily planning for her Positively Purple Birthday Party when "the new girl" Alexis arrives at the school the very same day Megan is handing out her party invitations (purple glitter, feathers and all!). What is Megan supposed to do? Should she invite the new girl? If so, she'll need to make another invitation quickly.

Alexis appears to be pretty, smart, athletic, and pretty perfect except she doesn't seem to like Megan at all. Megan assumes that Alexis doesn't like her because she's deaf but keeps giving her more "second chances". Megan even contacts Lizzie (a Deaf character from Deaf Child Crossing through internet webcam to ask for advice). Finally when Megan plans to distance herself her teacher assigns Megan and Alexis to work together on a science fair project. The girls come up with a science experiment to test to see if school hamster, Zippity's favorite color is....(you guessed it!) Purple. They make a cardboard maze out of shoeboxes and paint the little rooms --- one is red, one is blue, and, naturally, one is purple. Their goal is to run Zippity through the maze several times and see which room he prefers. After constructing the maze, Zippity stays at Megans house but her family soon discovers that her brother is allergic to hamsters. Megan and her father drive the project and Zippity to Alexis' house for safe keeping and Alexis has a temper tantrum (finally making Megan seem a little less bratty). It turns out that Alexis' brother has autisim and Alexis is a bit embarrased by his behavior. Megan ends up teaching Justin some sign language and he is able to communicate for the very first time.

I almost always prefer the original book and not the sequel; however, Nobody's Perfect
was so much better than Matlin's first novel. Megan's character is not so one-dimensional and I actually liked that Alexis called Megan out on being bratty and self-centered. This allowed Megan to see herself for how she was acting and make positive changes.
Nobody's Perfect isn't just about purple frosting and fluff (although both of which are included). It is a charming story about friendship, difference, and perfection (or rather the lack of perfection) in each of us. If you haven't had enough of Megan and her friends just yet, don't worry. A follow-up book will be released later this year (November 2007) entitled Leading Ladies.
Posted by Sharon Pajka,Ph.D. at 7:31 PM